EP. I Drove A Tank 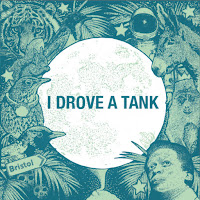 I Drove a Tank is an oldtimer on this blog. Its debut cd featured on this blog and was one of the best read posts in 2014 and single 'Miles At Monterrey' was reviewed last summer. Now, finally, the new ep simply called EP is released on I Have A Tiger records.

'Over The Moon', the first song on EP, starts with the end of 'Sgt. Pepper's Lonely Hearts Club Band'. Less imposing, but certainly the same idea. The music is more indie rock though. The singing is treated, not unlike Julian Casablanca's voice in The Strokes. Just like 'Miles At Monterrey', 'Over The Moon' is more indie than the songs on the band's 2014 album. The influence was much more 1960s, like The Kinks e.g. and the sound much more open. 'Over The Moon' is more direct, while the band captures something mystique as well. The mix is completely full, with firmly strummed guitars everywhere. As such it is possible to write that I Drove A Tank has searched for and found a new sound. It took me about two spins to get used to it and listen with a very favourable ear.

Singer/guitarist Hans Mertens leads his men into a more direct way of playing music, without losing anything on the melodies. I even catch some hints at The Cure of long ago. 'Columbus' is a strong example of this straighforward rock. The rhythm guitars are very The Strokes like, but the background vocals of Hannelore Reynders and the surfsound of the guitar solo, give the song a poppy feel as well, that work together in a great way.

The Velvet Underground has found its way into the music of I Drove A Tank also. Not so strange when The Strokes pop up in a review. In 'Bristol' the total madness is let loose. I'm not sure I want to find out what happened on the way to Bristol. The song does come back together though. The solid drums and the pumping bass. A 'Venus In Furs' on steroids, with strange sounds in the background that come forward more and more as the other instruments are faded out.

'Miles At Monterrey' was discussed last summer, but proves to be a good introduction to EP. The difference in sound, the wildness and chaotic noises fit well with the rest of EP. It remains an intriguing song even after six months.

If music was a beauty contest, it would be 'Pullover' that won. It is the song that reminds me most of 'I Drove A Tank'. The song aims for liking it directly. The others do not necessarily, but are much more interesting to investigate and learn to like.

'Another Year' has a vocal melody that could be part of the perfect pop song. The atmospherics in the background suggest other things. The trumpet solo by Jon Birdsong comes straight out of Bing Crosby. In other words, 'Another Year' has a lot of things going on which are classic pop and perhaps even avant garde at the same time. And it works too.

This mood is continued in 'Frown Upside Down'. Thanks to 'Kairos', my WoNo partner in crime .No's radio show on Concertzender, I  recognise this sort of atmospheric songs. The song changes into an indie pop song with very clear guitars and again a high sounding trumpet.

EP was recorded by Joes Brands also responsible for the sound of The LVE (and its drummer). The links between the I Have a Tiger Records bands seem to be close.

With EP I Drove A Tank explores a darker side of 60s music in a successful way. Along side this music the band also dabbles in atmospherics and mixes these in interesting, estranging ways. EP is an interesting next step in the career of this Belgium band. A step that allows them to go any way they like next.

You can listen to and buy EP here: