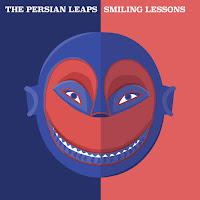 At times an album is released in the here and now, filled with new songs, yet could have been released decades ago. Smiling Lessons is one of those kind of records.

The Persian Leaps is a duo from St. Paul/Minneapolis, sounding as close to U.K. pop heroes of the 80s and 90s as can be imagined. Drew Forsberg (everything except bass and cover design) and John Hunt (bass, vocals) have a knack for pop rock songs. The duo was part of a full band releasing an EP each year between 2012 and 2017. This is the second as a duo release.

Anyone who listens closely can track the influences of The Persian Leaps back to their roots in the 60s, with the rocking hits of Small Faces morphing into the likes of Oasis and Teenage Fanclub. It makes the music of the band instantly recognisable and tickling the parts of my brain that want to be pleased just this way.

That takes one factor to take into consideration: the songs have to be good. The Persian Leaps does not disappoint here. I will not go as far to declare them outstanding. That would be heaping too much glory. Smiling Lessons is an album that pleases with the right kind of songs. Drew Forsberg knows how to write a good song, including a nice hook or two and a fine vocal melody. 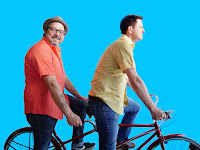 Just listen to the first song. 'PRN' starts immediately in all the right Britpop ways. Diminished and suspended chords chime in the pleasantest of ways. No great guitar solos but notes underscoring the rhythm guitar doing its, loud, thing. Anyone with a knack for Britpop ought to find their way with 'PRN'. Smiling Lessons, after a comment made by Forsberg's wife that he ought to take smiling lessons to look better on pictures, continues in this way. One song may be a bit tighter, like 'Chamberlain', others slightly more poppy, the overall score is Britpop.

The Persian Leaps presents just 7 songs on this album. If Oasis had stuck to this number, most of its albums would have been so much better. Seven songs is enough in this case. Smiling Lessons has a saturation rate as all songs fall into the same category, uptempo Britpop. With loads of energy and good will, making sure the score falls to the right side alright.

You can listen to and buy Smiling Lessons here: