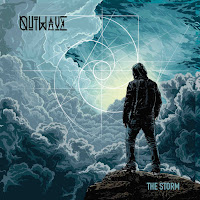 Outwave is a band from Italy. Padua to be exact. Italian artists are not a regular feature on this blog. For that the distance to the country is just too far. How is Bongley Dead doing? I haven't heard from the band since my visit to their studio in 2017. Recently The Storm was found on my digital doorstep. First the single 'Moving Tangle' and now the album, The Storm. It only took one listening session to know the album and I were going to be friends. Perhaps even great ones.

Why? Outwave rocks and has great melodies in its songs, with a singer who knows how to deliver melodic rock songs at full force. Every trick in the book comes by. Influences are worn lightly, without losing the band's own identity. Do I need to write more? No, I need not, but will of course.

In 2015 Luca Ceccato (voice/guitar), Leonardo di Sisti (bass) and Giovanni Masiero (drums) formed a band, later in that year to be joined by Alessandro Andrian (guitar). Five years later the debut album is there. The band may have taken its time here, judging from the quality it did the right thing to hone its songs into the shape I'm hearing in 2020.

Ranging from fierce rockers, to pop rock and Britpop, with a dash of emo in the singing Outwave knows how to make an impression on the listener. The lead guitarist knows his way around the frets. This is what he has been practising for in the past decade or more. Underneath is a tight band, laying the foundation for Ceccato's voice and Andrian's guitar to shine. The surprise comes when the lead guitar goes off into David Gilmour/Pink Floyd territory. Outwave has more than one and a half trick up its sleeve.

I will not overdo it. The Storm is not the best album ever in the segments of music it presents I have heard in my life. It is a nice addition though, as I am listening to the album with great pleasure. The way the title song moves in and out of different musical styles and moods is simply well done. Just like post-grunge singing is joined with a little Marillion in 'Leave'. The whole song long I'm wondering what will happen next. Outwave manages to build up the tension step by step, without ever exploding. In 'Autumn Trees' the band even starts with a piano, including a guest role for vocalist Durga McBroom, most likely the lady was allowed to sing 'The Great Gig In The Sky' live in Pink Floyd shows. Desperation is never far off though.

The Storm is a varied album taking the listener through different moods. Singer Ceccato could have lent his voice to an emo band, crying his heart out forever, but decided to be in a far broader ranged band. In the future he can expand into any territory he likes because of it, as he already does on The Storm. The Storm is a band for musical adventurers who like their foreign trips to skip the wildest trails but do go head first into all before that kind of trails. And have a great time along the way. Riff away Outwave.