Another Round. Indian Askin 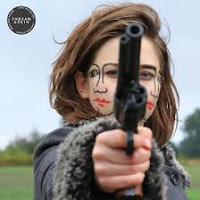 Indian Askin has released its second album a few weeks ago. I took my time to digest the new offering to form an opinion on where the band stands in 2019. My first impression was the album sounded bland compared to the debut album. It was not long before I had to start to retrace my steps.

Indian Askin first appeared on this blog as the support to De Staat. All these years later it still seems like a logical choice. The former band is far more psychedelic than the latter and has nothing to do with hiphop rhythms. That aside there are several likenesses. Starting with the level of weirdness both bands allow into their music. Both like to experiment with sounds and irregular use of instruments. The result are surprising turns in the songs.

On Another Round Indian Askin in one way takes off where it left us with 'Sea Of Ethanol' (read on here: http://wonomagazine.blogspot.com/2016/07/sea-of-ethanol-indian-askin.html), but also is two and a half year further in its career.

The easy conclusion is that the band has become more normal. The songs are somewhat more straightforward. The acoustic guitar played loud on the bass strings, plays a main role, leaving the effect laden electric guitar, so psychedelic influences, aside far more. The result being the songs come forward more. And through repeated listening to Another Round these songs are appreciated more positively by the spin. At the same time I have the impression Ayala and band mates have listened excessively to 60s Frank Zappa lately. His amount of weirdness is all over the album, including freak outish spoken word sections. Provided in the right doses, it remains totally listenable.

Of course Chino Ayala's voice knows a weirdness of its own. It could be an obstacle for some. For me his is the right voice for this music. The psychedelia that comes with some of the songs is underscored by Ayala's way of singing. Just listen to 'I Know How To Party' and hear how it all comes together. The voice, the weirdness, the music, Zappa, pop and party.

In my first reaction I did not have the idea that I would be running to my local record store anytime soon. It appears I have changed my mind. Another Round will be one of the first albums that come into the house on vinyl. It is varied, exciting and has quality. Another Round is another very good album to come out of this country and the right step for Indian Askin to have taken. Growth is the word here.