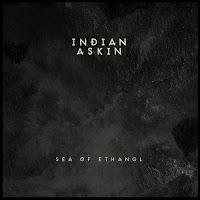 Over two years ago I saw a show of Indian Askin, supporting De Staat. Being a support act is ungrateful. Almost no one is there for you. The sound is usually subdued. Indian Askin made an impression musically and by the life graphics/light show that was created on site. At the beginning of this year the band featured in Oor's promises for 2016, after which I reviewed and bought the vinyl debut EP. Now the debut album is reviewed. As it contains most of the EP's songs, I hesitated for a while, but quality can't be denied, so here we go.

Indian Askin is a band from Amsterdam and around since 2012. It is fronted by Chino Ayala with Jasja Offermans on bass, Ferry Kunst on drums and Bart van der Elst on keyboards. Together they delve into 60s and early 70s psychedelia. Where Frank Zappa is not shunned in the sounds that are presented and The Beatles in in the phase of it drugged out melodies. Where everything in between can be found as well. The band were all over radio shows and tv a short while back. Having a manager by the name of Dennis van Leeuwen (ex-Kane) may help, but if it's shit, it's shit and that Sea of Ethanol is not. I can only conclude that the interest shown is duly deserved.

Sea Of Ethanol kicks of with an almost instrumental song. There is singing, but not much more than the title is chanted and some aahs. A bit daring for a band that has a front man singing it would seem. This is less the case after the listener has taken in the whole. In 'Wake Me Up' all that makes up Indian Askin comes together. A driving rhythm, some more exotic sounds, whether in percussion, keyboards or things with strings. Psychedelia is in the air, but not without a rhythm that prevents the song from floating away on a trip to where ever, leaving behind the listener not on the same trip. It is a fine balance that Indian Asking seeks and when found sees to in a fine way in 'Wake Me Up'.

It is not possible to not mention what went before in this country in the past two years. Neder-psych is on the agenda alright. First with Jacco Gardner, then Pauw and very recently Amber Arcades. (Expect that review soon.) Indian Askin falls into this group. With songs like 'Really Wanna Tell You' it stands out directly. The song has the same sort of directness that I like so much in Amber Arcades' Fading Lines' single. It is not the rhythm that makes it stand out, although extremely pleasant, it is the pulse and the melodic tricks that are presented in the song. Indian Askin has given sufficient thought to ear catching elements songs need to make them special or exiting. Sea Of Ethanol holds enough of these elements to make it happy listening.

"No man is an island" John Dunne once wrote. The weirdness the I character gets into in 'Island' makes me hope that this person is. The smell must be horrible, but redemption is around the corner: "I'm a changed man, for you I'm clean". The music underscores the weirdness. Psychedelia all around here. The rhythm of 'Better One' takes us back down and propels the listener forward with its drive and directness.

There are dozens of songs like 'Smudge', yet it fits so well in this spot of Sea Of Ethanol. It has a fine rhythm and allows the lead guitar to play some fine rhythmic melodies that expand the song beyond its elementary form and provides it with its touch of uniqueness. The next song, 'Asshole Down', is another example how Indian Askin treats a song. In my memory the song is one of the harder and faster songs. It isn't though. An acoustic guitar plays the main riff, the tempo isn't that fast. It's the singing that gives the impression. Another one of the highlights of the album.

There's only one thing to complain about when I've added everything up. That is that the EP doubles with the album. Luckily for all concerned that does nothing negative for the quality of Sea Of Ethanol. So smiles all around. And, the EP has a beautiful cover!

Looking back to winter 2014. I did not expect the album to come out of what I'd heard live then would be this good. Two years in between is a long time for a starting band. The waiting did the product good though. With Jacco Gardner and Pauw paving the way, the bed of Neder-psych was sowed, weeded and watered. Nothing is stopping Indian Asking from reaping.

You can listen to '*sshole Down' here:

or by Sea of Ethanol here on Bol.Com: