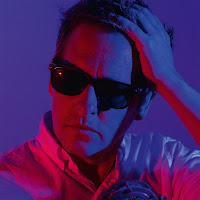 It is not unfair to state that Josh Rouse's artistic best days are behind him. Personally I have not heard a better Josh Rouse album than 'Nashville', his fifth album from 2005. We are 13 years down the road and on the 13th of April Rouse releases his new solo album. Is the fact that Love In The Modern Age also does not surpass 'Nashville' a reason to ignore the artist? A three times no, as we say over here. Why?

If only, to start, because Josh Rouse makes something utterly clear in his song 'Businessman': he is no longer an artist, but a businessman. 24 Hours a day. Undoubtedly he must have seen himself differently when he started out, writing songs on an acoustic guitar and performing them for the first time in small venues. To make it in this world of Spotify and The Pirate Bay an artist has to look out after himself and make enough profit to live and create. This song makes it a lot easier for me to listen to Love In The Modern World with a more than sympathetic ear.

That does not mean that I am listening without a critical ear as well. On his new album, I admit to having missed a few it seems over the past years, Josh Rouse comes close in sound to the über smooth heroes of the late 70s. The Christopher Crosses, James Taylors and Rupert Holmess of this world. Although they had a few moments, in general they were not for me. Rouse comes dangerously close with songs that hold no danger at all. This is not new, as in his best songs Josh Rouse is as smooth as the sea on a windless day. Except that wasn't the whole story. Here it seems to be.

So looking at Love In The Modern Age from that angle the album is without fault. Josh Rouse takes the listener on a smooth trip of lightheaded pop music. There's not a dent in the road and if there's one it is of the seize of a modest pebble the wheels navigate without even noticing. It is a dent like the drumpattern changing in 'Hugs And Kisses' with more emphasis on the snare drum coming from something very synthetic sounding. Nothing shocking.

In general Love In The Modern Age -is this Rouse's comment on the changing sex industry in Japan, I wonder?- is a synthetic sounding album. Percussion may all well come from a box, like the light sounding synths. The sound of which take me back to an 80s band like China Crisis. The guitar is not (synthetic), nor is the piano that comes through every once in a while.

The last song of the album 'There Was A Time' is the best one. Finally, in the dying minute Rouse lets go and lets a guitar go off into a solo, unleashes the piano for a few bars. Everything I sourly miss on the rest of the album. It just doesn't hold any songs that stand out, like so many did and do on 'Nashville' or '1972'. What I miss in general are those moments that Rouse forced himself on me, no matter how soft his music sounded. 'Why Won't You Tell Me What', is not the best example, as it is, relatively, loud. So is it just the harmonica that is missing? No, it's more than that. It's the sad songs that makes one feel good, "the only sound now love's gone".

With 'Salton Sea' Love In The Modern Age opens in a positive way. Fairly high paced and upbeat 'Salton Sea' moves forward in the way I like Josh Rouse best. The tempo and mood goes down with 'Ordinary People, Ordinary Lives'. The album settles into a mellow, at times jazzy, mood, that makes it an album for safe circumstances, not offending anybody.

Summing up, Love In The Modern Age is an album I could have done without, yet now its here I will certainly play at those late night moments when a mellow album is called for, playing in the background. If this however stands as an example of love these days, I'm simply glad to have been around in previous days as well.


You can listen to and buy Love In The Modern Age here: