Short and intense but sweet the show of Die Nerven was. The band came on stage, kicked up a storm and left in circa 50 minutes leaving behind a storm of feedback. That about sums it up. For a band with several albums to its name a bit longer show might have been an option. It may have been just enough though.

Sugar Factory is not a large venue, yet the number of tickets sold made building a smaller stage in front of the stage a necessity to have the impression of a filled venue. That is not a pleasant sight for a band travelling all the way from Stuttgart to play in Amsterdam (although the previous leg was in Cologne and the next in Groningen). Die Nerven has not conquered The Netherlands as yet.

Things started with support act Maple. I'm going to be brief here. Although the band had some interesting breaks in the songs and executed them flawlessly, my impression was that Maple is not ready for this type of show. The songs are mostly uninteresting, some Smashing Pumpkins references provided moments of brief recognition, but that is almost all I can tell. And those breaks? They didn't add anything to the actual song. When things went wild in the final song, which at first seemed to remain instrumental, I felt a first moment of hope for the band.

The trio from Stuttgart came on next. The short, soft bass player, the longer, spiky guitarist and the bit wacko, long-haired drummer showed within seconds that Die Nerven is used to playing shows and playing the strings that excite audiences. Except that did not really happen. I never saw those sparks fly that some songs definitely have in them. Whether the band had to hold back due to or because of the seize of the stage or the audience because of the proximity of the stage, I can not tell. Fact is, Die Nerven, mostly, play music that is not only for listening. 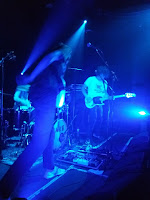 Having said that the set played was more than decent with several highlights. One being an forced upon silence of about a minute, which was quite impressive. The sonic storm coming from the guitar another. A less extreme (and loud) A Place To Bury Strangers sound as if the amp is held under water, the sound broken up the waves and dispersed by several currents to reach my ear all warbled. The band is able to play at different moods which come across brilliantly in the mood changes it lays (with)in its songs.

Seeing Die Nerven play for the first time I understand, finally, why I had so much trouble to find out who the singer is: the band has two. Julian Knoth (bass) and Max Rieger (guitar) sing lead alternately. Drummer Kevin Kuhn takes care of enthusiastic shouting in the background. Not everything explains itself in MP3s.

Overall I left Sugar Factory satisfied. The show was short but intensive and Die Nerven a fine band. Perhaps something was bugging them and we received a shorter show because of it. Who knows? What I saw was just fine.