Thanks to 'Oor', I was present at Field Music's show in a smaller hall of Melkweg, two flights of stairs up. Smaller, more intimate and quite excellent actually. Drawn to the show because of in part, slightly faint memories of albums I reviewed at the start of this blog and part Mark Carvell's comment on this blog that he rather liked the new album, 'Open Here'.

Field Music is the brothers David and Peter Brewis and three accompanying musicians who make a live rendition of their music possible. Not being overly familiar with the band's music there are a few points that stand out that I would like to put focus on in this review.

Switching lead roles
The two brothers, who look so incredibly unlike each other, but seem very much the same in appearance and demeanour, take alternate lead roles. They switch between guitar and front and drums and serving. The lead singing is not 100% changed with the instrument, but close. As on record they create everything more or less themselves, a show is also about letting go and trusting others. That they certainly do, with a near starring role for keyboard player Liz Corney, who got one solo vocal herself and lots of fine harmonies. 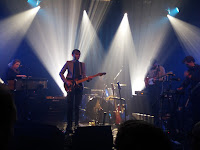 Bass player
Bass player Andrew Loather stands out. On stage he appears to be twice as tall as all the other musicians, but, more relevantly, also stands out because of the short, rhythmic bass bursts he produces in a lot of the songs. Most songs have rhythms that do not come along in ordinary pop songs and the bass guitar is underscoring a lot of this in the way it is played. It reminded me of Talking Heads a lot of the time. Not my favourite band at the time and still not really. I started to truly appreciate them when they made a switch towards pop in the second half of the 80s.

Difference 80s and 10s
That made me realise something. How uncompromising music had to be at the time of Talking Heads. Anything with a pop feel was suspect. It had to be raw, on the outer edge and 100% within an idiom. In the early 90s that changed. At a party the music could change from a popular Dutch vocalist like André Hazes, to a hip hop track onwards to Napalm Death, back to a 60s track by The Rolling Stones. Anything sort of went. In bars things were not that extreme, but certainly a song lasted no more that a minute or so and on to the next in another genre. Listening to the teenagers in my environment the musical diversity hasn't really changed. They just pick out what they like, do not pay for anything, just consume. 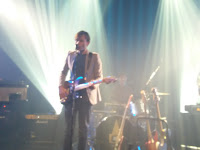 Difficult music, perfect pop
These musings bring me back to the show that I was present at. All was conviviality, some bantering between audience and band, some good jokes and fine observations even. When playing the songs, things were serious, although with obvious enjoyment on both sides. There was no anger. And that is where Field Music is different from the 80s bands that influenced it in its inner core. They took other elements like Joe Jackson, The Beatles, Prince, even a cappela singing (truly fantastic by the way) and all brought it into a mix. Yes, Field Music plays what rightfully can be called difficult music. At the same time somewhere in between the different rhythms and chords played they have taken painstaking care to find the melodies and harmonies, where all the early 80s bands most of the time got stuck in the difficulties. So in that sense Field Music is a perfect band for the 10s. Blending it all to perfection and throwing in a lot of joy.

All time good feeling
Is what the band produced and shared with the people in Melkweg, receiving it in abundance in return. If anything people seemed happy being there and listening to beautiful music being played. Music that had a clear edge and yet can rightfully claim to be perfect pop. 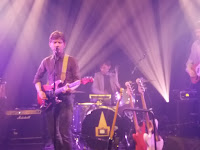 Average age
It does seem that Field Music is producing music for ageing pop fans, not unlike myself. Many people preferred to be seated even. So do I sometimes but not there, not then. This is music to move to. Slowly, no need for wildness, but moving is required. Not knowing any of the lyrics, makes listening so much intenser. Nothing was a given, just faint recollections from something that I had heard a few times at most or years ago. When willing to move along in time, all ages can find something of its liking in the music of Field Music. Someone like me had to grow in time to truly be able to appreciate it. To let all the small pieces fall into place and form the whole of Field Music.

Field Music is a fine band and its new album 'Open Here' a fine album.