Pictures Of The Floating World. I Am Oak 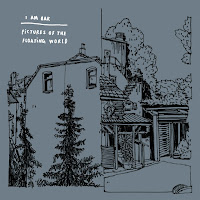 About a year ago I saw one of I Am Oak's lasts show in The Netherlands in the form of the touring band that played together for several years. Whatever Thijs Kuijken's plans for the future are, this fall he released a mini album with songs played live as a solo act.

A show like this takes a rather small venue filled with an extremely dedicated audience in order to be a success for artist and audience. Listening to the recordings it seems that conditions were ideal.

I Am Oak is an act of very modest proportions. In playing, singing and presentation. When too many people come to a show as friends latching on without knowing what to expect, it could upset the atmosphere seriously, inviting more people to start talking and from that moment onwards the magic will be gone. I found that magic moments were created by I Am Oak that evening in Brussels and they were welcomed as such by those in the audience.

Now Pictures Of The Floating World. The title is a translation of a Japanese expression for print art that focuses on travelling and performing. The life of an artist like Thijs Kuijken. A fitting title to the small album. Small in many ways.

I simply can not find a lot of words to describe Pictures Of The Floating World. Nothing happens. There is no intricate guitar playing. There are no big emotions, gestures nor explosions in the songs. While listening all I get Thijs Kijken's voice and his acoustic guitar. His voice ranges in the same segment the whole album, while he strums elementary chords. And despite all is brought down to the very basics of his songs, as he might have written them in his bed or living room, they come totally alive. It is so easy to imagine me sitting in the audience, totally enraptured by the music. In an audience that is silent. Where the only thing reminding me of being in this world is a trickle of water behind the bar to rinse the glasses in or the refrigerator switching on. The rest of my mind is wandering, far off, in the world created in these songs.

There's only one way to listen to the eight songs on this album: in total seclusion. Just you and the album. With Kuijken's voice in front, his guitar serving him just behind his voice. A dutiful audience applauds in between. A "thank you" at the end closes it all. I Am Oak's new album totally succeeds in bringing the little moments of magic from a venue into my home. For 25 minutes I'm enthralled, silent, in awe.

You can listen to and buy Pictures Of The Floating World here: