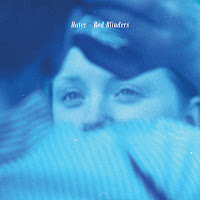 What a contrast between the band name and the music. Nowhere it is written that haters cannot be subtle. It's just not a word that I associate with the other.

At the very first note I am reminded of Amber Arcades, the Dutch band/singer, also able of writing these pleasant sounding poprock songs with a little edge here and there.

Singer Caroline Landahl's voice is delicate, almost fragile. Always searching for the place where her voice is at the point of breaking, like in the title song 'Red Blinders' or singing more undercooled, where she is in total control of everything.

This EP follows the debut of Hater, released earlier this year, called 'You Tried', which I have missed. Comparisons range from Alvvays and The Smiths to Jefferson Airplane. That is some timeline by my book and two big names to step into the shoes of. There's a little on Red Blinders reminding me directly of The Smiths. Especially in the guitar work. The lightness of the sound and the way the instrument is strummed points to an influence of Johnny Marr on the band.

In general it can be put that there's an 80s feel to the music of Hater. The electronic beat in 'Red Blinders' sounds as old as the road to Rome, yet conjures up the right effect for the soft voiced song, with its delicate guitar playing. One of my two favourites on Red Blinders.

The other one is the, unexpected, party song ' Penthouse'. The tempo goes up, the bass becomes prominent in carrying the song, while Landahls singing moves towards Mette Lindberg's, without going so far out. The song is not so much happy. 'Penthouse' recreates the atmosphere of so many 80s danceable songs that had nothing to do with happiness, yet allowed for an escape by dancing all the angst and weltschmertz away, almost despite themselves. Hater does just this, but I'm afraid all the "bats", the Robert Smith look-a-likes, have gone home 30 years ago today. That's when they mysteriously disappeared from dance venues. Let me enjoy it anyway, as this is a great song.

Red Blinders is a fine EP and I'll state for the record that it is not more than that, but one that made me curious enough to reach back and listen to the album. So perhaps more Hater on this blog in the coming months?

You can listen to and buy Red Blinders here: