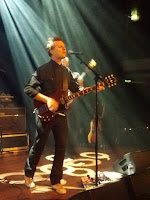 My introduction to Reiger was in the winter of this year as support to Bettie Serveert. I only saw three songs, but the EP #1 was reviewed favourably. When I found out that Reiger played the support to Strand of Oaks, I made sure to be on time this time around. And rightly so.

Reiger ('heron') plays energetic indie rock with a few influences from over the past decades woven in here and there. Reiger in general is influenced by U.S. acts, so the two bands fitted well together. They have a Neil Young side to them and both dare to go out and play long instrumental interludes pumping a song up to explodable proportions before reigning it all back in again. They don't object to a short punky song hidden into the set either. Reiger adds a hint of Queens of the Stone Age in there as well. As I wrote, a good fit. 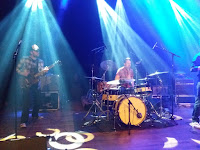 Reiger is Matthijs Peeters, a man with a name in Utrecht because of his past band, The Gasoline Brothers. Reiger is his solo project with on stage three partners in crime who are very much a band together. The interaction is genuine and committed to the music. Peeters is allowed to go to the outer limits of the song, the rest holds it together for him. Even making things more exciting by playing with intervals in the rhythm at the right moments. Reiger definitely is a different beast live than on record.

The new songs I heard make me curious for EP #2 or whatever the name will be. The ones of #1 all came over well enough, but were familiar to me having reviewed them in January last, with 'Hollow Man', again as the absolute masterpiece, the song with a strong Blur element in it. No matter how different, Strand of Oaks' 'JM' and 'Hollow Man' are both epic songs. The kind of song that goes beyond the obvious, beyond the three minute popsong and goes all out. Something Reiger managed to do successfully several times in its 40 minute show. 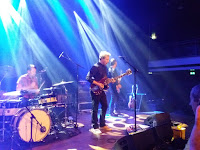 A lot of people had taken the trouble of coming out early to see Reiger play and that was a correct decision. The band got the response it deserved as it gave its all and a little more here and there. Peeters is probably too old to hope for a breakthrough, but there's nothing stopping him from rocking out this way for a good time to come. There will always be an audience for better alternative rock songs and he is able to write them.