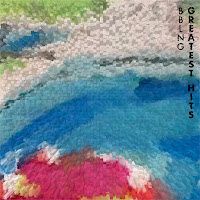 Animal Collective meets Justin Bieber reads the bio that accompanied my copy of Greatest Hits. What to make of that?, were my thoughts. I can't make chocolate of the music that I heard of Animal Collective so far and do I have to add anything to the second connotation? So what is Tiny Room Records presenting to the world? That's a fair question.

As the indie label has surprised me a few times over the past months, I slid the copy of Greatest Hits into my player and ... have a hard time making chocolate of what I'm hearing. At this point I have heard the album twice and it's hard to make heads or tails. I can't make up my mind yet, so I will play the album some more over the coming weeks and see where I stand by the time the release date comes closer, which is 25 August.

Due to the holidays the album was put to rest as tends to happen to all sorts of things in that time of the year. With the 25th approaching fast, I had some catching up to do. Greatest Hits has proven itself to be an enormously intriguing record, where many influences meet and decided to intertwine in interesting ways. From the get go the album takes the listener on a trip of aural proportions. For the listener with an open ear, many pleasant sensations come by, as well as some bewilderment.

Babalong is Dave Mollen and Willem Waterschoot, a studioproject. They bring in who they need to create their vision that became Greatest Hits. This may have been different when Babalong started a few years back, as I see the same names participating on the first EPs. Doing a search on Babalong on the Internet I found four EPs on Bandcamp. So Greatest Hits is the band's first album. No doubt every one looking at the title will have the same question: what hits?, but is that what it's about? The title is provocative, perhaps not the smartest one to chose. It does draw attention.

So coming back to the description Tiny Room Records sent along. It does hit the nail on the head, in a weird way. Alternative, electronic sounds and beats come together with true melodies and experiments. Babalong chooses not to take the easy way out, far from, but somehow it manages to draw me into its music. There is a door allowing me in, despite the fact that this is not my first choice of music, not my second nor third.

This has to do with two factors. The, somewhat electronic, voice of the singer is one aspect, the other is the warmth of the electronic music. For me there are faint hints of Orchestral Manoeuvres In The Dark and specifically 'Joan Of Arc (Maid of Orleans)' in parts of the music. The combination makes me follow the curves and bends in the music. The little melodies, the changes in the rhythm, the way things change in general. At times it is a bit too much, like 'Into The Loop', but in most songs things are just right. Take a listen to the first single of the album, 'Longer' and you will understand all I wrote above. In the song the alternative pop mixes with dance and synthpop (of the 80s) in a perfect way.

At this point in time I haven't made up my mind about Greatest Hits, but in the past weeks the album has surprised me in a pleasant way, so I do not see a reason why it would not do so when I put the album on again in the future. Greatest Hits got me out of my comfort zone and that is scoring points to start with.

You can listen to the single 'Longer' here: