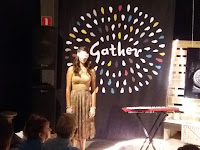 Gather live was held for the last time in that unique location, the groundfloor of the former V&D store, about to become a Hudson Bay department store. In a corner where perhaps the men's underwear was sold for decades, a modest stand was built to create an arena shaped stage, with the artist on the ground and the audience sitting on the stands. An old couch or two and a few bar stools and everyone present is seated. With the closure of Gather, Sabrina Vermeulen is on the look out for another location to stage her living room concerts away from home.

Two artists performed. First there was Jasper Schalks, a singer-songwriter about to release his first EP and veterans of this blog, Elenne May.

Jasper Schalks sat on a stool with just his guitar, a borrowed pick, a capo and a thumb pick. In combination with his charm, under-cooled presentation and moderately dark voice it was more than enough. He started off with a cover of one of his favourite songs of all time, Glen Campbell's 'Witchita Lineman', or as he pointed out Jimmy Webb's \Witchita Lineman'. With his dark voice it became a very solemn song., even more than Campbell's original with all its strings and horns. The intimacy of the venue allowed for interaction between the audience and Schalks over the recent demise of Campbell, the documentary over his final, hard years because of Altzheimer's disease. 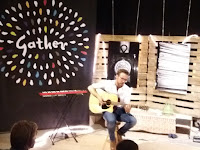 In his own songs Schalks proved to have learned lessons from 50 years of singer-songwriting. Songs sounded familiar in a pleasant way, with Schalks' voice making them personal. Personal experience led to a surge of new breakup songs, that sounded intimate and sung with the right tone to convince. They were all new, but then all songs were new to me. Another cover was a bike song by Richard Thompson. After drinking four beer, it may be too difficult to play, Schalks said. Well, I wonder how the song sounds when he is sober. The intricate melodies were all played flawlessly. It was a regular looking chord that was half-missed towards the end of the song. As nearly all singer-songwriters play more or less complex motives, it stands to reason that it was a chord that did not go well.

With one last self written song, Schalks stepped of his stool, announcing that his debut EP might be released in November; or not. The album is recorded with a band, with which he also performs regularly. Any way, it is something to look out for.

Those reading this blog know how favourably I view Elenne May. As part of its 'End of summer tour' the band played in Haarlem for the second time. Drummer Eddie could not make the show, so there was a surprise. The second surprise was that guitarist Roeland played an acoustic guitar the whole show and the third that singer Elenne stood in corner, blindfolded, like on the cover of the second EP, 'Stairs Raise Children', of the three that make up the cd 'Veggie Patch In The Desert'. Singing the opening song this way, underscored part of the story that is told on the album. 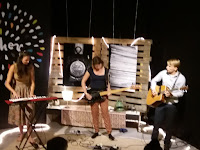 Having seen the band perform several times over the past year and some months, it was nice to see this other side. I could see the musicians finding their way in a setting where the vocals are not amplified, all percussion is missing and playing a guitar that lacks all the electronic effects sustaining the sound. Truly listening to each other so that the balance remains correct. In other words, each individual member is complete master over his/her respective instrument. Only that allows for the attention needed to pull this all off. Accents in the music were perhaps even stronger in this setting simply because there was no drummer/percussionist to enlarge them more.

With ease the band captured me again with its strong songs, the magical atmosphere that surrounds them. Kate Bush entered my mind while listening to the music of Elenne May at Gather. The atmosphere of the music has this fairytale quality in sharp contrast with the lyrics that have nothing to do with fairytales. In essence it all boils down to this own sentence from 'Housewife In The Desert': "I believe the gender roles we know, were made up in the Stone Age, we don't need them!" A clear message, holding not one single letter of Chinese. From this sentence the whole of 'Veggie Patch In The Desert' enfolds itself. An album which I personally think is one of the very best this decade produced. It ought only to be a matter of time before more people discover this fact.

Summing up, Sabrina again presented us with a very interesting line up. Now time has to tell where Gather Live will move to.


You can find Jasper Schalks on Soundcloud:

The music of Elenne May is available through Bandcamp: