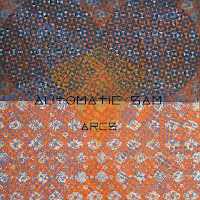 It was my intention to write a short, but powerful review of Arcs late March, early April, but I failed to do so. Then, when I found out that the drummer of Paceshifters left Automatic Sam for that band, I intended to follow up my review ...; you get the drift.

Recently I played Arcs once again, heard the power and the energy and thought lets get this album off the pile before it is too late.

An album that starts with an interpretation of the intro riff of 'Helter Skelter' has to be good. 'Ukiyo' takes a curve straight away and rocks out in a Neil Young kind of way. The guitars are blowing each other away, riffing and playing a loud rhythm. The bottom end is taken care of extremely obviously. The new drummer is "Animal's" little brother with some restraint. His name? Lars Spijkervet. That sounds kind of cool for a drummer.

I am reading on the bands that influenced Automatic Sam, taken from the name of a character from the Captain Beefheart song 'Tarotplane', I simply do not know a single one of them. What I hear is Foo Fighters, some Led Zeppelin in the riffing. again the hardest side to Neil Young, Queens of the Stone Age. Artists that dare to go for the largest denomination in rock, without hesitation, without holding anything back. Automatic Sam does just that. With a foundation so solid it must be a pleasure to rock out over for the two guitarists Pieter Holkenborg and Rense Slings. The two create a mash up of guitars as solid as a layer of concrete holding the feet of a criminal about to be jettisoned into the East River.

Automatic Sam is a Dutch band from Nijmegen. Arcs is its third album. And is into its sixth drummer in 9 years. Do they wear them out too fast? Tim van Delft probably ran out of spare time when his primary band, De Staat, really started to take off this decade. Whatever the reason, Spijkervet is in his right place from what I'm hearing. I would keep on his right side if I were the other three members.

It's not that I like all songs as much. What I do hear is the energy that goes into the music of Automatic Sam. Nothing is done in half. We run the full gamut together. There's no reason why this music should not be heard outside of the borders of this medium sized country. Go for it, lads.

You can listen to and buy Arcs here: