Our Blood. I Am Oak 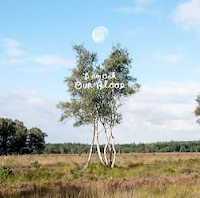 Snowstar Records veterans I Am Oak return with a beautiful subdued album called Our Blood. By now this blog can also call them WoNoblog veterans as Our Blood is the third album in a row to feature on these pages. After Erwin Zijleman's post on Nowhere Or Tammensaari, Wo. followed with his post on 'Ols Songd'. How does Our Blood do after all the positivism of the past?

It is that it is hard to call the music of I Am Oak positive. For that the music is too subdued, with a moody gloom hanging over it. Otherwise the first word to use would have been positive, again. This band around singer and songwriter Thijs Kuijken creates music at a high level, without ever getting exuberant for one second. A single guitar note or a note played on the piano is the shout of joy on an album of I Am Oak. Don't go looking for it in Kuijken's voice. The fact that this album's theme is the loss and dealing with that loss, is not so much something which makes up for the subdued sound. This is who Thijs Kuijken is. How he plays and creates his music. In fact the music is even more filled out than I remember his previous two albums to be.

If I had to give the music a name I'd call it dreampop. The music is so dreamy or as if played in a state of trance. What I also hear is the harmonies of The Eagles, in a very modest way, a hint of Neil Young and the voice of Midlake and The Moody Blues. Marcel Hulst's solo album under the name Mountaineer called '1974' is a real soul mate.

Thijs Kuijken seems to have an inner core where everything is at peace. A spot where he can turn to any time everything around him is in turmoil. A spot he retreats into and where he finds his voice and his music. I imagine him sitting in his room and the music just flowing into his hands into his guitar. Little bits and pieces making up a song. Lyrics that present themselves in half-sentences with the played and replayed songs to be. Totally shut off from the rest of the world, in trance. With it come ideas that make up the instrumentation. Snippets of other instruments form in his head.

It's not for nothing that I Am Oak has found its way into 'Kairos', the radio show .No makes for Concertzender. Kairos is a state that I think Thijs Kuijken reaches when creating his music.

It's not the easiest sort of music to make. For the living room there's no problem, I have a choice to listen or not. Conquering a concert venue is another thing. I loath to think when there are too many people who brought their friends who just don't shut up. There would be no I Am Oak left. That's one reason why I like 'Dacem' with its distorted guitars. An I Am Oak rock song. The accent has to be put on the band's name though and not on rock, as everything is relative in this dreampop universe of course.

The album has a few more moments in which something like passion shines through, mixed into the background but it's undeniably there. Just listen to the guitars in the final song 'Your Blood'. If the final song is an inclination to future music, the volcano may erupt in 2018. 'Your Blood' is a beautiful song that expands and retracts. A great ending to Our Blood.

With Our Blood I Am Oak has made another album which aims for tranquillity and restfulness (in most songs). And succeeded. Our Blood is not so much beautiful. For that it is a little bit too thorny. Put the album on too softly through your speakers and you have a wallflower of epic proportions, put it on loud enough and it envelopes you completely, warms and caresses, thorns and all. From that moment on just enjoy all the details, like e.g. the Twin Peaks like keyboards in 'Shallow End'. Soft music played loudly? It sounds like a contradictio in terminis, but it works.

Finally a complement for the fantastic photo on the sleeve. Just that is worth buying the LP.

You can listen to 'Omen' here: