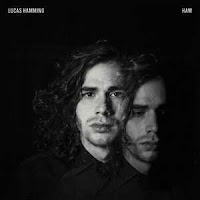 This spring Lucas Hamming played the support-after show of Sunday Sun touring behind his debut EP The Perv In Perfection. Both reviews can be found on this blog. Now we have a full album and I don't mind admitting up front that Hamming delivers on his promise.

In the past month and something his latest single is on the radio. Now that I'm listening to the album it is that I start to notice how good and subtle the single really is. 'Never Let You Down' on the radio is this prickly pear kind of song. Now, with a better sound and all present on my headphones, it is that I start noticing how subtle the song also is. That total and utter pop feeling is unleashed fully from the multi layers of the song. The prickly chords are what gets noticed first. By maneuvering between them, I get to the sticky sweetness in the middle. In other words an extremely good song. And 'Never Let You Down' is only the beginning of the fun.

Ham is an impressive album for a debut. Hamming manages to impress with songs that are in different realms as well. He battles with Sunday Sun in a direct way in the rock ballad 'Make Me Care'. His approach is more direct and louder in some parts of the song, but the melody and the harmonies are just as sweet. The mix between pop and indie rock is impeccable. On record the two acts are much closer than I'd expected on the basis of the show. Lucas Hamming is much louder and pure rock. On record things The Beatles come forward in the melody, some of the guitar sounds, a typical Beatles chord here and there and not to mention the oohs and aahs and the harmonies in general. That Lucas Hamming is not afraid to lend something that proved to work in the past, is shown in 'Fool' where the build-up of Bowie's 'Let's Dance' comes by twice in further totally different song.

The more I listen to Ham the more the album surprises me. I had expected a nice debut album, with some fair tunes, but not outstanding. Slowly the realization creeps on me that Ham is a pretty perfect first album by the 22 year old from Blaricum. The album does not score high on the originality list, but then who does in 2015? The album scores high on other points, as there are, working with the music of the past decades in extremely pleasant ways and a lot of enthusiasm. Lucas Hamming and his crew know just what to do and do that extremely well.

To find a downside, 'Fast And Loose' is not my favorite. The song has a soul kind of singing. High up and fleeting. The rocking 'Mr. Irresponsible' with its pleasant guitar riff and strong rhythmic playing makes up for this small laps instantly. In all the songs that follow there are these instantly recognizable elements, that tickle something hiding in my memory. Because of this the only thing I doubt at this point in time is whether I will build a lasting relationship with Ham. It pleases simply too easy it seems. As this is a first album the coming years will tell us who Lucas Hamming really is, when he has the time to truly find his own voice.

For now Ham is a nice debut album that knows a few true highlights. Not unlike Douwe Bob's first album. In the meantime I'm going to enjoy every note of it.

You can listen to 'Never Let You Down' here: