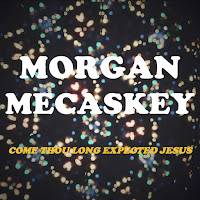 If I had to write one word it would be wow. Just wow!

New work by Morgan Mecaskey was announced on Twitter this week. I hoped for an EP or more, but received a Christmas song instead. Ouch, I thought. Xmas songs are not my cup of tea, with some songs in a rock setting as exceptions. And then I opened this digital Christmas gift. Things sort of changed fast in my anti-Christmas song world.

Hearing is believing, but Morgan Mecaskey managed to record a great Christmas song with sonic explosions, a blistering guitar solo and all. The song starts in a traditional way with the sleigh bells chiming happily as they do on every Mariah Carey Yuletide song. And then the magic starts sparkling like it does there somewhere on the North Pole where presents get packed and distributed.

Now I know many a Christmas song, also in the English language but this song from the mid 18th century written by Charles Wesley I had never heard before. The official description is an "advent song". The text can be sung over two melodies, so that's a bit confusing.

Morgan Mecaskey does a few things to this traditional. She rocks out in a The Pretenders kind of way, but not before she graced the song with the kind of traditional beginning one would expect. She sings over sleigh bells and an ever so soft keyboard. When the band kicks in it is with a sound beat. The muted solo guitar notes give a driving force to the song that is picked up in the second stanza.

Next up is an explosion of lead guitars. Nothing is left of the Christmas thought here. The gates of hell are fully opened. They are pushed firmly shut again as if in a fright, a nice synth line is laid over the muted guitars as a cover up. The hard rocking elements make Come, Thou Long Expected Jesus the hardest rocking song by this singer to date. In fact there is some anger showing through here, while at the same time a laugh must have been on the faces of the players when she came up with this arrangement. All the guitars and keyboards are played by Ms. Mecaskey. Anthoni Foti plays drums, Jeffery Sutton the bass.

It is quite easy to conclude that Morgan Mecaskey surprises again. Even in a Christmas song from 1744. I don't think that anyone ever contemplated to work on a hymn from the episcopal church in this vain. In past times people went to hell for less. If so, she'll find me cheering her on there. This song is good. Very good. Happy Xmas (War Is Over) won't be surpassed, but all others? Easily.

Circa ten songs into her career, I have to say, once again, I'm a fan. An artist that can surprise me and win me over with a Christmas song that I may play the rest of the year without a problem, has to have exceptional qualities. Morgan Mecaskey has those. When is that full album coming? I just can't wait.

For those interested, you can find reviews of her two EPs and an interview on this blog.

You can listen to and buy Come Thou Long Expected Jesus here for only $1: