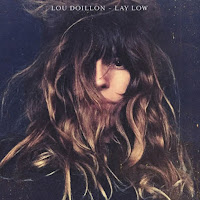 Out of nowhere I was surprised by the new album of Lou Doillon, one of the ladies out of the Jane Birkin dynasty, with a lot of talent. With her album 'Places' she featured on this blog before and now Lay Low. With only one listen she qualified for the short list of 2015. Can you conclude anything else that I was impressed? No, you can't dear reader. But what made me feel all warm inside while listening to Lay Low? Let me try and explain.

It starts with the voice of Lou Doillon. A bit husky, a bit seductive, a part strict and extremely serious. Something sexy but also dangerous. In other words a voice that intrigues while listening to it. Now a voice is nice but I have never bought an album because I liked the voice(s) on it. Yes, they are a great addition, sometimes even the extremely, luxurious icing on the cake, but not the reason to take out my wallet. The music is the only reason to do so. In the case of Lay Low both are in perfect a balance.

Lou Doillon's new album is less unique than I remember her previous album to be. There are songs that are in line with Adele, with Dutch singer Kovacs, with Lana del Rey. The guitars that hover all over the songs is where the distinction is made. Lay Low at heart is a rock album. The production makes it breath and sets Lou Doillon at the centre of all things. All instruments are in orbit around her voice like planets to the sun. From there each song gets a treatment that makes it unique against the others, making Lay Low a very diverse album.

Doillon recorded this album with Canadian Taylor Kirk of Timbre Timber, a band that was reviewed bij Erwin Zijleman on this blog, who served also as co-producer. Together they created a widespread sound. When I close my eyes I can imagine the music is played in my room. The mix makes it appear to be real close.

The opener 'Left Behind' has the same effect as 'Hello' by Adele. An empty song, just a piano and a voice giving a personal message to someone left behind. Not as monumental, but certainly more human. To me Lay Low really starts with 'Above My Head', the rough sounding guitar drives on the song, that has something dirty, even nasty to it. As I said there's a dangerous side to the voice of Lou Doillon and here it is. More guitars get into the mix, a great, eerie aaah, some piano notes. It all ends before it gets fatal, my attraction to this song.

A piano carries 'Where To Start'. Soon after that a desert twang guitar comes in for the first time on Lay Low. One of the distinct features of this album that give it a surf/western flavour without having anything to do with that kind of music really. An atmosphere of something lost is created by it. Not so much physical as an equilibrium in life. Like a pillar sawn off, tipping everything over.

Title song 'Lay Low' falls under the 'Above My Head' category. 'Weekender Baby' is different again. An acoustic guitar does the trick here. Another very basic song. mmmmh is the only embellishment the song receives beyond the guitar (possibly two) and a voice.

The march rhythm of 'Let Me Go' is another of the highlights of Lay Low. The song breaths the sort of life that every single song of Adele's new album '25' lacks. Now I've never been a fan of the current number 1 singer in the world, just some of her "louder" songs on '21' (and 'Skyfall'). Where it all comes together is 'Good Man'. It is as if Doillon and Kirk really started to understanding each other and had their breakthrough musically. All the sounds on Lay Low come together in this western desert sort of song. It could have been on a Calexico record without a problem and be the best on it. Easily.

I liked 'Places', Lou Doillon's debut on record. I like Lay Low a lot better. Like her half sister Charlotte Gainsbourg did with Air some years back, she has aligned herself to another artist and together they have come up with the best they could share together, creating a true hybrid between them. Lay Low is deliciously good.

Except the cover. It looks like a younger Armand, though recently deceased, with a new wig on his head.

You can listen to 'Where To Start' here: