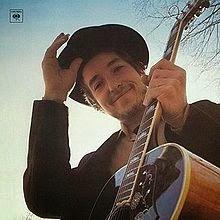 And again we turn to those magical years in rock 1968 - 1969 when a young Wo. discovered something called the charts and through that a phenomenon that gave a new dimension and depth to his appreciation and relationship with music: hits. One of the hits was 'I threw it all away' in the spring of 1969. With it came an album called Nashville Skyline or so he discovered in the mid 80s when he truly started to appreciate the bard from Minnesota. (The hit had made no impression at all at the time.)

Strange as it may be to some, I think Nashville Skyline Bob Dylan's best and most consistent album too date or very nearly so. Is it because he's smiling on the cover and gives a glimpse of how he really is when the spotlights are off and far away? Who knows. This album certainly sounds like troubles were far from his mind when writing and recording it.

The album kicks off with a duet of Bob with Johnny Cash. The two had already shown a deep appreciation of each other in the past. Cash had recorded some of his songs and Dylan had appeared a few times on Cash's tv show. Together they breath life into an older Dylan song, 'Girl From the North Country'. Dylan's higher and shriller voice doesn't match with Cash's baritone, but who cares? The two plough themselves through the song, harmonise and even left a little slip of the tongue in there. Why not? Perfection is not necessarily perfect.

The fun really starts with 'Nashville Skyline Rag', an instrumental ditty that is played with panache and down right fun. Every one is enjoying himself on the song. Solos roll on and off like in the finest bluegrass tradition. Heck, The Hackensaw Boys built a career on this.

In a book on Dylan's songs I once read, the author discusses his oeuvre song by song. The third song on Nashville Skyline was mentioned as a simple toss off. Well, I have news for you, this is one of Dylan's finest. A simple sounding, oh so pleasant rocking song that just pleases me so much. The playing is elementary but every note is in its right place, the sparse lead notes enhance all they have to and tells all about his love for, I suppose the Mrs. Dylan of the time. He's happy being a lover, a husband and family man on the side and it shows through 'To Be Alone With You'. I loved singing and playing this song in a cover band long forgotten, in a different century. A nice feature is the bridge part of the song, a staple on this album. The "Is it rolling, Bob"? at the start of the song is Bob Dylan asking producer Bob Johnston if the tape is rolling. Johnston passed away this week at the age of 83.

The name of that single in the spring of 1969 was 'I threw it all away'. The opposite in every sense of 'To Be Alone With You'. A despondent Dylan is lamenting things lost. The guitar even sounds sad in that beautiful intro. If anything this song has a real into (and outro). Dylan may be known for just tossing a song on tape and be done with it. This intro is totally worked out before, just can't be a spontaneous invention. For that it's simply too neat and well played. All is well balanced here. Dylan sings with a deeper voice, but also diminished and sad in a totally resigned way. "Love is all there is, it makes the world go 'round", not a lyric one expected from Bob Dylan at the time, nor today.

The lightness of 'Peggy Day' is another sort of love song that is absent in the rest of his career. All is so up-beat, cozy and happy all around. His heart is taken away and not about to be returned any time soon. This song features an acoustic guitar in the lead, matched by a pedal steel, adding an Hawaiian flavour to 'Peggy Day'. It all ends with a great turnaround, making the feast complete.

One of Bob Dylan's most beautiful songs is 'Lay Lady Lay. Dylan captures the laziness of a warm summernight and the love that is possible in that "big, brass bed". The way the organ works with the pedal steel and the chord progression of the main part of the song, makes it sway the listener into the same mood. The two chord and mood changes are fairly brilliant. They make 'Lay Lady Lay' stand out. One of the gems of Dylan's career.

'One More Night' is a ditty, that much is true. Again Dylan captures a happy mood in a country kind of way. If there is a lesser song on Nashville Skyline, then it is 'One More Night'. In a way it is an up-tempo, but lesser version of the final song, which we will come to later. It's fun and that's all.

Seriousness is found on this album also. The tempo is up-beat, the lyrics are not. 'Tell Me It Isn't True' is song about denial. His object of affection was seen with another man or so someone has told. "All I want is your word", that is enough to make the bad things go away. 'Tell Me It Isn't True', is a follow up to 'I Threw It All Away'. The moods come close, but not totally. The order on the album is sort of wrong. Great song, again.

And then comes the intro to 'Country Pie'. What a deliciously subdued but happy stemming guitar solo. Dylan, again, captures a mood that is unheard of in his repertoire. Of course his nasal voice is there, but he's using it in a different way. Through most of Nashville Skyline. He is out to please here and that is a rare something ever since his first albums and gigs.

'Tonight I Will Be Staying Here With You' ends all the fun and is another of the great tunes of Nashville Skyline. The second single, not a hit, at least in NL, is again about (falling in) love. The singer is not planning on leaving, at least for tonight. Packed suitcases may be thrown out of the window, including all the worries, but that's all. Again a song with a change in its general course, that lifts it up to great heights. I just love this song. "Tonight" is the word of this album. That suggests more urgency than the general mood shows, I think.

Is all rose scent and moonshine then? Well, yes. Nashville Skyline may be seen as format album. Dylan operates in a pop-country rock-country blues triangle and many songs have the same, seemingly simple (3) chord progressions. It is often the change to one or two additional chords in a bridge that give them their brilliance. This fact gives Nashville Skyline that little extra along with the fact that Dylan captures happy and sad moods in a brilliant way. Nashville Skyline convinces, utterly, in an un-Dylan way.

You can listen to 'I threw it all away' live on the Johnny Cash show here: