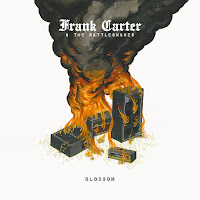 WHOA! The storm called Frank Carter & the Rattlesnakes blows itself through my ears straight into my brain, shaking up neurons and whatever one has up there in the grey matter. In July this country suffered the worst summer storm since whenever (I missed it). In August my ears suffer the same sort of experience. Of course I've listened to the punk-garage-rock Carter & co play before, but it's been a while since I so fully appreciated it.

At first listen I backed off some. This can't be for me, but song after song Blossom landed and I started to appreciate all that was going on in the storm. Like walking against the storm on the beach. Jackets full of air, sand dusting off my trousers, hanging against the wind to not blow over and hoping that the pressure doesn't drop away for a second or two to land me flat on my nose.

Blossom is Frank Carter & the Ratlesnakes' debut album. Carter played in bands (Gallows and Pure Love) before, but is new to me. Carter started writing for Blossom in December last year and started working with guitarist Dean Richardson. In the recording studio of Thomas Mitchener, who grabbed his bass along the way, together with drummer Memby Jago all came together. "It’s the most violently aggressive punk rock band I’ve ever been in,” says Carter. “I feel like I’ve got a license to kill again.” Let's take a look if the music holds true to the bio's punkstompin' words.

'Juggernaut'  is the first song on Blossom. Aptly titled the song kicks over everything in front of it, including Frank Carter himself who is or pretends to be out of breath from shouting, screaming, spewing his lyrics out into the microphone. The only overdubs are moments that exactly that happened. The rest is push record and blast away. If Carter is holding anything back in 'Juggernaut' it most be the last few threads that allow him to keep his sanity. All else seems to be coming out. Anger, fear, teenage angst, frustration and madness at the world all over. The music follows suit and goes all out and more, the proverbial 110% is played here for sure. Think that brilliant album opener of The Living End, 'Prisoner of Society', something like that matches my reference of 'Juggernaut'. The Living End is or was in 1998, more of a rockabilly powerhouse, but the intention is exactly the same. Another reference I can offer is Danko Jones, but Frank Carter's song are far more melodic. After that we have to venture into U.S. punk territory.

The rest of the album continues in this vain, but manages to take of the gas just an inkling here and there so that all gets the chance to breathe. What I also like in Blossom are the moments in which the band offers these little extras in which it shows that it can play. A bass run here, a guitar moment there, these moments that are allowed to come forward out of the wall of sound, which is huge, for a few seconds. No climbing over this wall.

How long Frank Carter's voice will hold out, time will tell. I don't even want to think about having to "sing" like this every evening. I hope for him that the "fuck, fuck" and a cough or two at the end of 'Loss' doesn't come from coughing up blood from a vocal cord injury.

The album is over in 35 minutes, which is long enough. One balled piece of energy that has to be accepted in small amounts. Blossom holds exactly enough for me. What a feast, what a storm, what energy. All unleashed for those who enjoy a little kick in the hearing every once in a while.

You can listen to 'Juggernaut' here: