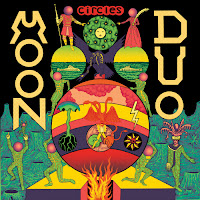 And now for something completely psychedelic. Moon Duo's album totally qualifies for the psychedelic rock album of the month reward. The album is spacey, dabbed in fuzz and erratic, like the fluid projections of old. Never a dull moment. Only after finishing the review of this album I found out that Circles is not Moon Duo's latest album. Who cares? I like what I'm hearing, so here we go any way.

Moon Duo is Ripley Johnson of Wooden Shijps and Sanae Yamada. The duo is from San Francisco as any band playing this genre ought to stem from. They started playing music together in 2009 and after two EPs released 'Mazes'. Circles is the duo's second full length album. As things go with songs like this, there is a long string of bands that went before. More recently The Black Angels, my Japanese heroes Marble Sheep are in here, but so are a whole lot of 60s garage rock bands right up to Jefferson Airplane as one of the über hippie bands. Moon Duo took a little from all and incorporated it into its own rocking sound. The title song is exemplary where the darker mood is lifted by the lighter sounding solo guitar. A combination that makes listening to Circles quite attractive.

That there is a darker side to Moon Duo's psychedelia is not surprising. The Velvet Underground is not far off either. The stark drumming of 'I Been Gone' is straight out of Moe Tucker's repertoire, if we omit the hi-hat that is. The organ plays the basic riff, the fuzzed guitar can explode any time into anything. A wall of sound 'I Been Gone' is. A sound that is haunting, on the tail of the prey the whole time, no chance left to escape. How can such a menacing song, sound so attractive to my ears? The explanation seems as simple as is evident: I'm not the prey.

Variation is not something to take into consideration on Circles. The album is fairly one dimensional. The details offer solace here. The different sounds of the guitars (effects). The keyboard lead in 'Dance, Pt. 3'. It is there where I find the fun of this album. In all songs the drums take off in a fierce rhythm, the bass lays this sound foundation without being overly noticed. Over that Ripley Johnson sings with a fairly monotonous voice, a bit shrouded even, sometimes supported by Yamada. A layer of guitars and keyboards are laid over all that. All very, very straightforward, as far as psychedelia is just that. The moment lead notes come in, is where the real fun starts. A thousand effects are used to created differences in the sound of Moon Duo.

One of the surprises is the Bo Diddley tempo of 'Free Action'. Diddley would never have come up with this execution of his beat, but it is unmistakable. The endless near drone rhythm, all in one chords, with a small variation in the chorus. Totally over the top guitars that must have made someone deaf while recording, mixed somewhere in the far back of the song as embellishments. Near madness. 'Trails' is pure release after the onslaught of 'Free Action'.

It all ends on a lighter note with 'Rolling Out'. The vocals are lighter, the guitar effects are not. Again this song at heart is one riff and from there all these other things happen. Johnson and Yamata seem to find an ideal lead line to accompany a monotonous drone of a song. Variations again is the word that presents itself here and what makes 'Rolling Out' fun to listen to. Circles comes very close to one of my favourite albums in this genre, 'Phosphene Dream' by The Black Angels. There's more of a country/surf twang guitar in there, mood and music match well though.

Moon Duo's Circles is one of those albums that I enjoy on the side. It is far from my favourite kinds of music and still it is so much fun. So now lets go out and find the new album....

You can listen to 'Circles' here: