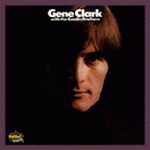 Was this an obscure album when it was released in February of 1967? I have know way of telling, as I wasn't around in a serious way, where music was concerned. Gene Clark had left The Byrds not long after the band broke big with its Bob Dylan poppyfied cover of Mr. Tambourine Man, followed by a string of lesser hits, but hits none the same.

Gene Clark debuted as a solo artist with the album Gene Clark with the Gosdin Brothers. Whoever Rex and Vern were. If they have a claim to fame, it seems to be this album as far as I can tell. Their role is fairly modest, backing vocals, also it seems. All instruments are played by others. Including Gene Clark's former The Byrds mates Chris Hillman and Michael Clarke. Another guitarist is the later Byrd Clarence White, but also Glenn Campbell. Leon Russell and Doug Dillard were there as well.

Clark wrote most of the material and in a 60s way it is spectacular. Its reputation by now is such that the album even got a re-release on vinyl recently and that is how it came into my possession for the first time. Gene Clark is operating on a couple of cutting edges on this album it seems. He manages to balance on a thin line between folk, The Beatles turned The Monkees and psychedelia. Both following and leading the way. Several songs are the sort of songs he already brought to The Byrds, the multi-layered soft sung sad songs with the characteristic Rickenbacker sound that accompanies it. Songs I got to identify with Roger McGuinn. Time for a correction it seems. In several other songs that riffing like 'Last Train To Clarksville' is all around, something that started with 'Paperback Writer' and 'Daytripper' a half year earlier. If anything, Gene Clark's first album shows how fast a few artists interacted and how influences jumped up and down between them in 1965 and 1966. Finally there is an earlier incarnation of 'Elevator Operator' on 'Gene Clark with the Gosdin Brothers. A totally different song from Courtney Barnett's, but just as psychedelic. Another sign of the times song.

It is hard to predict on the basis of this album where Gene Clark was going to go to in a few years, i.e. the country (rock) with Doug Dillard. That would not be correct on the basis of 'Keep On Pushin', the most country oriented song here. A country rock song before it existed. What is correct is to write that his way of singing is just right for it. The original ten song album is a gem of 1960s pop and folk(rock). There is a re-issue called 'Echoes' with more songs on it. A few new and alternate takes. 'Echoes' only underscores the importance of Gene Clark with the Gosdin Brothers. The album never did much beyond critical acclaim. It was snowed under by The Byrds' (then) new release 'Younger Than Yesterday'. The lack of a hitsingle perhaps. This album is decidedly better than The Byrds' effort. An album with a much more lasting impact. In hindsight. The tragedy of Gene Clark probably. A man bound on a bad destiny, but here he was moving beyond what The Byrds were able to achieve fast.

In 2015 I find that this album really is a perfect mix between what was hip in 1966 and what was soon to be hipper. Gene Clark had a great feel for where music was going to go and was a great songwriter. This album reflects this very well. A couple of the songs are good and several very good if not to say outstanding. Just listen to an energy driven song like 'Needing Someone' and the already mentioned 'Elevator Operator'. 'Echoes' is a sort of song Lee Hazlewood was still recording years and years later, echoeing a sort of music that is much older as well. Ages old and new at that same time.

In the Gosdin Brothers Clark found the harmony vocals he had lost with McGuinn, Hillman and Crosby. Still, it remains strange that they are in the title. Although I already knew the album for a few years and not more than that, now it is in my possession, I really start to appreciate it. Gene Clark with the Gosdin Brothers is a beautiful album and available on vinyl none the same. The opportunity to get a classic record into the home, in the way it was intended by Gene Clark et al.

You can listen to 'I Found You' here: