The Deaf. The Deaf 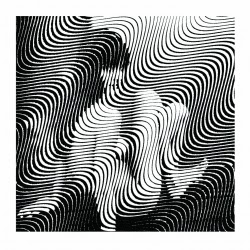 The Deaf, the band that Di-Rect gitarist Frans 'Spike' van Zoest has on the side. The band I read about every once in a while, never heard music of, and that this was the kind of music he really wants to play. Now I've never been a fan of Di-Rect, although I saw them play live twice and late in 2012 certainly not bad either. Still, you won't catch me writing on them a lot.

My first thought while hearing The Deaf was whether I had to take the album seriously or not. The cover art is of a 1960s psychedelic naughtiness and I just was not sure if I had to take this album seriously, having read about it being a side project for the main artist in the band in which he could spill some of his unspent musical energy. Well, listening to The Deaf it has to be said that it certainly is worth it.

The Deaf started in 2007 and has four band members: Spike van Zoest (guitar, vocals), Miss Fuzz (bass, vocals), Kit Carrera (drums) en Midnight Mau (keyboard). In 2011 its first album was released called 'Toot Whistle Plunk Boom!'. From what I read, having never heard the album, is that The Deaf does not sound like its first album. Slower, probably a bit deeper and with wider influences from the 60s. It is this decade that stands out musically on The Deaf. Not only musically, but also soundwise. The sound of The Deaf is as flat as an original 60s recording and that is a bit of a shame as the songs could have sounded so much better instead of authentic.

Spike is a singer as well. His voice fits the 60s easily. The harmonies with Kit Carrera work well. The ballad 'Rides in, rolls out' shows this in abundance. In the other songs Spike has this sneerlike quality that many 60s singers had. Musically the album veers between garage rockers with a tight rhythm section and the electronic organ filling up the space left beneath the vocals and more poppy songs. Together they make for a well-balanced album. Both type of songs stand out because of each other.'s presence. As such they lift the quality of The Deaf. Something I often miss in other albums in this genre. When everything is at the same level, it is hard to distinguish between songs and the quality has to be above superb to keep my attention.

The Deaf does this for most of the album. Several of these songs would have charted in 1966 and 67. They are better than "originals" like e.g. Les Baroques, simply because The Deaf has this heritage to use and piggyback on, next to having a composer who knows pretty well how a song should go to make it interesting. Spike van Zoest cultivates his dopehead image obviously, but at the same time is a dedicated composer and musician who is not afraid of doing a 60s ballad or two where no one expects him to do just that. 'Lonely life' is another ballad that downplays the up-tempo songs before it. Small and timid, preparing the listener for the next outburst. Again there is a role for Kit Carrera here that lifts the song up even more.

With a single like 'Sin city' The Deaf comes close to The Stooges mixed with a dash of sixties pop. The hardest edge is taken off. With a song like 'Sin city' and a garage rock ballad like 'Rides in, rolls out' there are quite some contrasts. Tommy James & the Shondells come to mind here.

From the start of the album with 'Go loose yourself' the intention of The Deaf is completely clear. To rRock out in a nostalgic sort of way and to create a smile on the face of the listener. Mission accomplished, dear reader. The Deaf convinces easily in the chosen format. Not overly original, but certainly well done, played and sung. A band like a million others in the past 50 years, with the right songs, but also with enough quality to convince. As such The Deaf exceeds the monicker hobby band of famous guitarist without any problem. A fun album by a fun band.

You can listen to 'Sin city'  here: