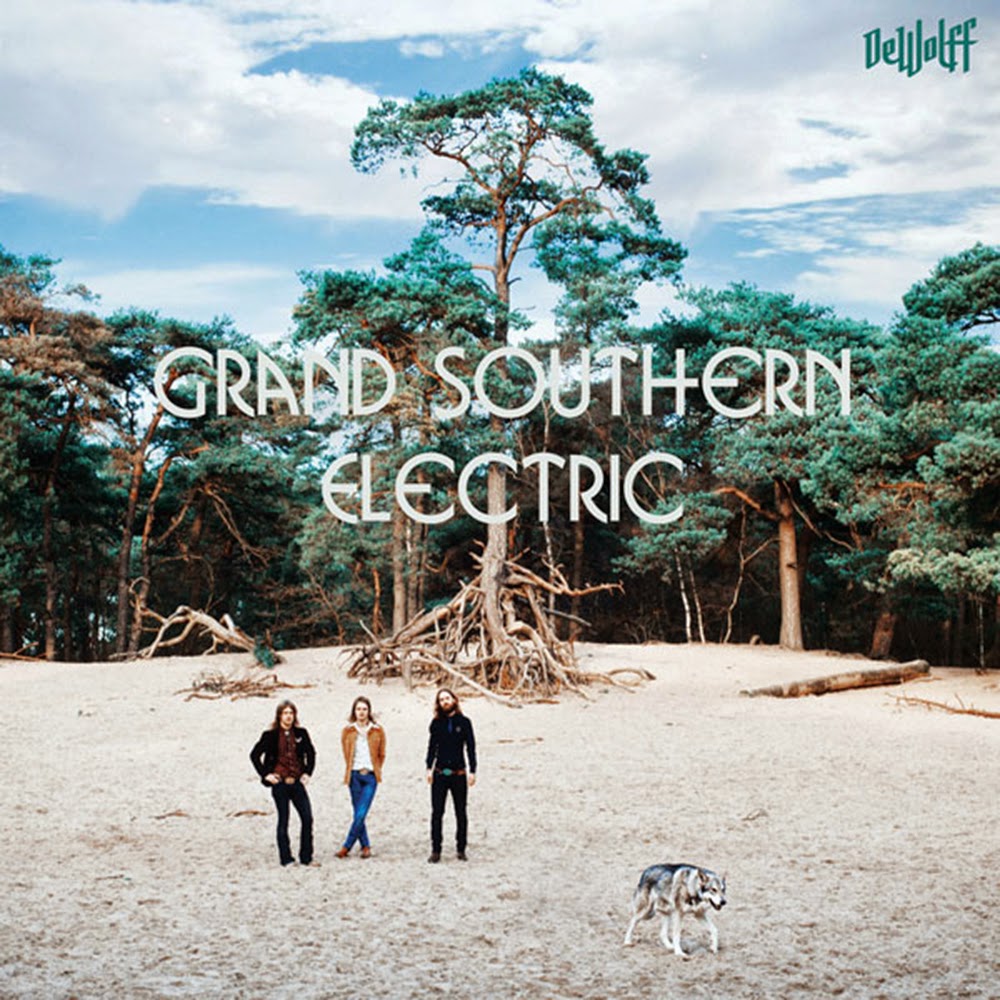 DeWolff featured on this blog before. First with the well appraised album 'DeWolff IV' and secondly with a review of a blistering live show in LVC Leiden. Now the band from the southern parts of The Netherlands is back with a new studio effort called Grand southern electric. As much a reference to the band itself as to the place on this globe where DeWolff recorded its new studio album: Valdosta in the southern state of Georgia. Together with Mark Neill, who in the past worked with The Black Keys, the band recorded its new record. Evidence shows that this decision turned out to be an extremely good one.

De Wolff is around since 2007 when the band started in Geleen, a town under the smoke of chemical giant DSM and in former coal country. The brothers Pablo and Luka van der Poel and Robin Piso make the band and form an unusual line up: guitar-drum-organ. Pablo van der Poel sings as well. The music is of days from way back when. Cream, Deep Purple, Jimi Hendrix Experience, anything that infuses power rock with a dose of psychedelia. A little more modern The Black Crowed come to mind. And perhaps because of its venture into the deep south there are a few elements of southern rock in Grand southern electric as well.

If anything Grand southern electric is more focussed. The attention is more on the song. Primarily it's about the song. What does it need to shine and become special? As an effect the songs are better than on 'DeWolff IV'. Either that or the bandmembers have become better songwriters. That's another option of course. It is very easy to instantly like Grand southern electric. I never had that with the albums preceding 'IV'.

Let's dive deeper, e.g. with 'Ripple faced thing'. This song holds this incredible loose piano playing, giving the song a tremendous boost and great variety to the album as a whole. 'Ripple faced thing' holds a 60s feel all around. There are The Kinks references as well, although from the early 70s, like e.g. on the 'Mushwell hillbillies" album. Slight country references creep through the lead guitar sound.  Pablo van der Poel sings higher and to top it all of there are these fantastic handclaps. So simple, yet so effective and incredibly groovy.

The basis of Grand southern electric remains the guitar and organ that play of each other with the drums backing up both in the middle of the mix. Together they create a Deep Purple like groove. Pablo van der Poel doesn't have this huge Ian Gillan voice, but that fact lends the sound of DeWolff subtlety and different layers of emotions. Most songs are in this category. All are pleasant to listen to and allow Pablo van der Poel to go off into interesting territories with his electric guitar solos. Let's not forget that DeWolff has a master guitarist within it.

'(Ain't nothing wrong with) a little bit of loving' starts of small and different. There's the piano again. After a while the song takes a turn back to the more usual sound, but also letting in a little Arctic Monkeys in the riffing and the background vocals. Finally all get to solo some. The longest the band or Marc Neill allow on Grand southern electric. The band returns with the extremely bluesy 'It's about time'. Deliciously subtle, while the guitar has this dirty sound and the organ spews chords out and Robin Piso gets to play a solo that is close in sound to the 'Show me the way' talk box solo of Peter Frampton.

Grand southern electric is over before I know it. So back to the beginning where 'Stand up tall' starts again with a great riff. One of the songs that show the progression DeWolff has made in abundance. A very smart move to start this album with this song. Powerful, great melody, a drum solo and great singing. DeWolff is proving to be one of the bands that is going to carry the flame and legacy of a bygone era of classic rock with new songs of rocking quality. A band to watch over the coming years. Live DeWolff proved extremely convincing. In 2014 they have also convinced me for 100% for the first time on record. And yes, I have to say it again: another great record from The Netherlands in 2014. There's something in the water!