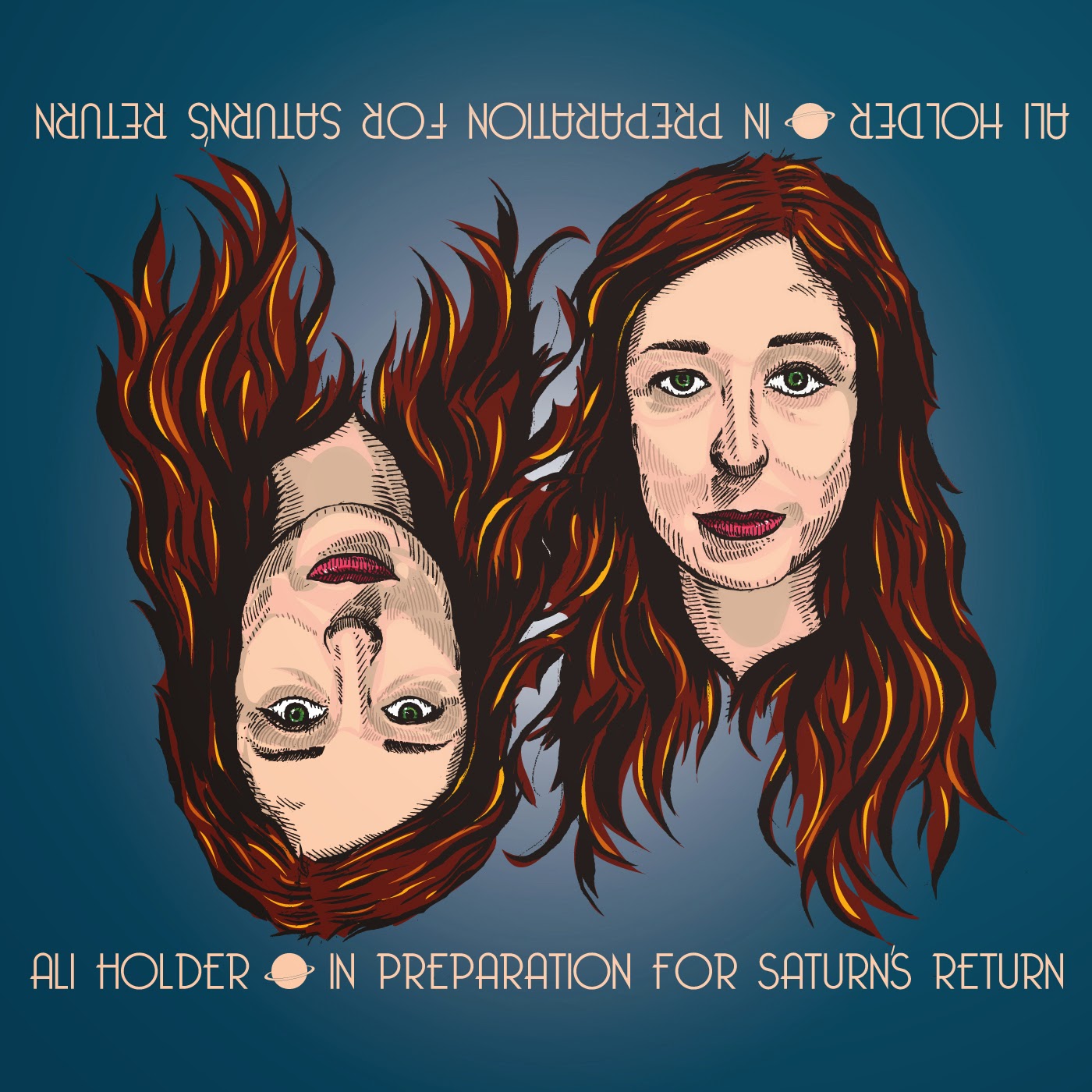 First it was Erwin Zijleman's chance to write about this album. Following his lead and having bought it myself through the Bandcamp link provided below, it's my turn to praise the debut album of Ali Holder.

In preparation of Saturn's return caught me in the very first minute. The moment the violin kicked in in a Papa John Creech style, almost immediately followed by a load of horns, Ali Holder had me hooked. The slow, jazzy, but very catchy rhythm with those fat, thick, exciting accents. And her voice that is clear with a full, full volume, has this dangerous edge to it, that makes it very attractive to listen to. 'Falling up' is one hell of a way to open an album. A statement, a declaration of intent. The downside is that when an album is opened in such a tremendous way, it sets an awful lot of expectations. So what does Ali Holder serve us up?

'I saw a wolf', the second song delivers straight away. Again a laid back rhythm, but this time with the warm sound of an Hammond organ. Next to that Holder sings a duet with guitarist, and co-writer of this song Daniel Thomas Phipps. Straight away there is a lot of variation to In preparation of Saturn's return. So far so good.

Ali Holder is from Austin, Texas. This means that after Amanda Pearcy we have a second lady from Austin featuring on this blog within a short period of time. Both active in the roots, folk, singer-songwriter with a twist of country corner of modern music. The somewhat mysterious sounding album title is explained on Ali Holder's Bandcamp site:


"Every 27 years Saturn makes a complete orbit around the earth, returning to the place it started from. This astrological phase is said to usher in significant changes into ones life. Having just turned 27 years old and having released this album on the 27th of August, Holder has created these songs in preparation for this move from childhood into adulthood".

Music from the Austin region can go off into all sort of different direction and genres. The town is proving to be a melting pot of U.S. roots music more and more. All these influences come out to play on Saturn's return. Real tearjerkin' country songs like 'Drinking double' are back to back with more pop oriented songs like ' You and I'. This mix makes the album so strong. That and Ali Holder's voice. She is the master of all her songs and sings with an ease, but gives them just what they need in performance. Relaxation, emotion, commitment; you name it, it's there.

And yes, sometimes this album ventures into the country lanes a tat too much for me. What I found, is that in most cases I do not care, simply because Ali Holder's voice and the way these songs are coloured in. The production of Saturn's return is clear and the mix spacey. The voice clear up front, backed by bass and drums and acoustic guitar. All else is allowed to meander around or next to the singing voice. It creates a feeling of the band in a large room or barn, playing together for a small audience, i.e. me only. The music itself moves from country, roots, to folk and singer-songwriter with band, with some stepping out to a jazzy rhythm and sound or more poppy feel. In preparation of Saturn's return is an album with many faces, which is quite alright. Ali Holder keeps it all together with the help of her sound engineer Andrew Ratcliffe, who gave the album it's exquisite mood.

'Mourning dove' comes dangerously close to the wrong side of country (for me). Again the singing in combination with the bare, slightly alternative sounding accompaniment saves the day. And the harmonies. Saturn's return ends very, very small. Ali Holder with just her ukulele. A load of echo on her voice and these lone notes. Pretty impressive and faintly remembering me of Gillian Welch in a positive way.

After lauding Amanda Pearcy, it's time to do the same honours for Ali Holder. In preparation of Saturn's return is quite an album. If you're in roots segment of music, this is an album to check out.

You can listen to and buy In preparation of Saturn's return here: http://aliholder.bandcamp.com/
Gepost door Wo. op 10:07