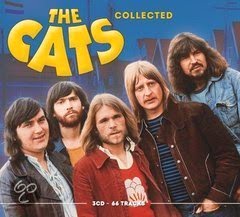 In the past month we have published several albums stemming from 1968-1969. This one does not fall under this series, because released in 2014. Still, The Cats were discovered by yours truly in 1968. They were even in the first Top 40 I ever saw with 'Times were when', so there you go.

About a month ago I wrote a small recollection following the demise of Cees Veerman, guitarist and one of the vocalists of The Cats, the band from Volendam that scored many a hit, mainly between 1966 and 1984, before the band called it a day for a final time in 1985. Most hits after 1974 I'm not familiar with as The Cats and I parted ways some time before that already, with exception of oldie 'The end of the show' that was released to celebrate a, not definite, split.

Since writing about Veerman I learned that Jan de Hont, guitarist of ZZ & de Maskers, September, Boudewijn de Groot and Bram and Freek played guitar solos for The Cats in the studio, because The Cats at the basis was a vocal group and not instrumentalists. And a three piece cd box under the title Collected was released. I decided to listen to the hit singles and found out that there are a lot of them.

To recap, The Cats were a five piece: Piet en Cees Veerman, Arnold Mühren, Theo Klouwer and Jaap Schilder later added with Piet Keizer. (And no it's not the two famous Dutch soccer players among them.) And to give you an idea of how big this band was, The Cats scored 11 golden singles, >100.000 units sold, 14 golden LPs, >50.000 units sold and has 37 Top 40 entries of which 5 reached #1.

As I already wrote The Cats were big, in fact since the spring of 1968, when I discovered there was something as a chart in The Netherlands, the Veronica Top 40. 'Times were when' was in on its last legs, soon followed by The Cats's biggest hit to that date 'Lea'. There were five hits before that. I missed the first two, but do no the third one 'Sure he's a cat', a great pop song. Not unlike Cat Stevens' first two hits. It's number five that I really remember from the time, but also had sort of forgotten all about. Hearing the violin intro, I know exactly again why I liked it so much as a kid. 'Turn around and start again' has a perfect pop feel, without being a perfect song. It comes close though. A strange mix it is, between the orchestra and the fairly hard rocking backing band. The strange combination is what makes this song work. The song though that really surprised me, is 'Marian'. There are some tacky violins here that one has to get through, but 'Marian' is a perfect pop song and a totally deserved number 1 hit.

The first number 1 hit was the aforementioned 'Lea'. One week in the fall of 1968. Also the first of the very bombastic songs, songs that sets The Cats apart from most other pop music. As I have written before, not unlike the Bee Gees in its first incarnations. Piet Veerman had taken over solo vocal duties from Cees Veerman and that certainly changed the texture of The Cats. More dramatic, swollen, but also giving the music another depth and seriousness. The music even got its own label "Palingsound" ("Ealsound"), because The Cats were from Volendam, an old fishing community on the former Zuiderzee. Something else had changed also with 'Lea'. The Cats wrote their own hits from then on. In Arnold Mühren the band had a songwriter who was able to write number 1 hit songs

That the band dared to experiment, became clear from the Spanish guitar sounds that were incorporated from 'Where have I been wrong', it's fourth number 1 hit from 1970, that followed the rather "normal' pop single 'Magical mystery morning'. One I didn't remember, but like as well. Songs following got other more exotic rhythms like 'Let's dance' or 'Be my day'. There is also a swap at rock and roll and country in 'Country woman'. The older 'Vaya con dios' that only became a hit in 1972 is almost a religious song, with a dominant female vocal harmony. Something very uncommon for The Cats. 'Vaya con dios' reminds me of 'It's the end' by another Dutch vocal group called The Buffoons. Very theatrical, loads of emotions, but also an extra. It is the only The Cats song, which does not have a clean vocal. Piet Veerman's voice breaks and that gives this softly violined song an edge that makes it different and good.

'One way wind' (1971) is something of a guilty pleasure. I just can't help liking the song. That is also just about the end of my musical relationship with The Cats. I discovered bands like Slade, T.Rex, C.C.S. (admittedly with exception of Slade just the singles) , that rocked in ways I didn't know before and The Cats, well, they did not. So no matter how long the list of hit singles, although never as big as before 1975, is, most songs have made no impression on me or I just don't know them. With that one exception the beautifully, melancholy 'The end of the show'.

Summing up The Cats are just a little more then a memory of early youth. Several songs have all the elements of a guilty pleasure. A few are just plain good by themselves. It is time that I revise my early 1970s vision on the band and admit that it is a lot better than I cared to remember and can rightly be called one of the better 60s pop groups from The Netherlands.

You can listen to 'Turn around and start again' here.