With a little help from my friends. Joe Cocker 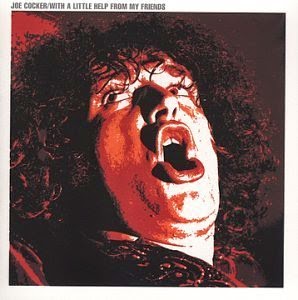 A while back we started a series on albums released in 1968-1969 for a specific reason that was described in the first publication on 'Spooky Two'. Since, there followed several posts including Chicago, Blood, Sweat & Tears and others. Joe Cocker's debut album is the next in line.

Joe Cocker was one of the artists that featured in the Top 40 in autumn 1968, with his blown up version of The Beatles' 'With a little help from my friends'. I wasn't aware of the original, so for me this was a Joe Cocker song. I got to know the song even better through the Taiwanese copy of 'Woodstock' a friend had, on which there is an 8 minute plus version of 'With a little help to my friends', that goes totally over the top in the last three minutes.

Up to today I have never listened to this album. Simply because it never happened and I never really became a fan of Joe Cocker. When we get down to it, Cocker is a cover artist with a hell of a voice and musicians and producers around him that allow him to have a career that is coming close to spanning 50 years. John Robert Cocker was born in 1944 and recently turned 70. Having played in a few bands since the age of 16, he did not become a successful recording artist until the release of the famous The Beatles cover in 1968. The sort of cover that eclipses the original and never lets the original shine again.

The set up of With a little help from my friends is a blueprint for all Cocker's album that followed. Covers of hit records of days past and a few originals, co-written with in this case his band leader Chris Stainton. Having never heard or seen the record sleeve, I was surprised how many well-known artist collaborate on this album from at that time a fairly obscure British singer. Tony Visconti, Henry McCullough, Steve Winwood, Albert Lee, Matthew Fisher, B.J. Wilson. And best of all: Jimmy Page, should you be wondering who's playing that great guitar riff in the hitsingle. Players doing a session, that is all.

The songs vary from Bob Dylan's 'Just like a woman' and 'I shall be released'. The umpteenth version of 'Don't let me be misunderstood' and Traffic's 'Feeling alright'. Next to that there are three originals, that are not necessarily lesser songs in quality than the covers, so that's a compliment. Most songs sound familiar, but do not really add to my experience with the originals. Except for that one song.

As I wrote I never really warmed to Joe Cocker. Yes, I like 'Cry me a river' and 'High time we went' a lot, 'Delta lady' comes close. The reggae of 'Sheffield steel' appealed to me for a while, but it took to 198something before Cocker really made an impression on me again. 'When the night comes' is, as far as I'm concerned, his other total classic song.

With a little help from my friend is a decent album, but I will not warm to it. I like the organ-piano sound of the singing. Joe Cocker's voice remains special. To think he was something like 23 when they recorded this set of songs. His voice is like a centenarian blues shouter's in great health. The album cover though is great. Cocker is just wild here. The music is good, not special. Except for that one song. Just because of this song, 'With a little help from my friends', Joe Cocker will know eternal fame. With a little help from his friends, who made the song this great. The guitar riff, the organ, the dynamics, the bass guitar's runs, the backing vocals and over all this this rasp of voice, with so much power and despair in it. There's only one singer in (t)his league: The Shoes' Theo van Es. No one else gets close.

You can listen to 'With a little help from my friends' here.
Gepost door Wo. op 14:50