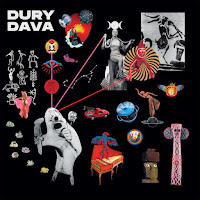 Today three album reviews. This is number two, from Greece. We started out with music with the brakes firmly on. Now brace for adventure, folks.

Dury Dava's self-titled album is an adventure. It is an album where should an opera singer have entered in the middle of the mix, I would not have been surprised. It would have been a musical experiment of which dozens come by on Dury Dava.

Don't ask me if Dury Dava is good. It just is. It's a gigantic effort that has been pulled off fully, completely and leaves me exhausted, yet, perhaps oddly, satisfied. There are no dull moments, certainly strange ones but also exhilarating ones. Like I said: it just is.

On this album a lot of noise comes by. Loud, shredding guitars, over pounding drums and a pumping bass, with a singer shouting sounds. African noises are mixed through the song. In the next song a jazzy clarinet or something like it, drives a song on melodically, while all the instruments sort of go about there way in a totally loose structure. Not unlike in Bowie's 'Blackstar', but far looser and more experimental. 'Triptych' could be the music in an erratic movie where the lights keep changing the camera is held frantically, Unwatchable for normal eyes, but by closing my eyes I can follow the impossible movie through the music. Something eastern enters the clarinet solo, while the band slowly works towards a solid explosion that dutifully arrives.

Of course I can't look into the rehearsal room of Dury Dava, but I have the impression that there are no rules. Any band member can come with an idea or develop one while playing together and take the original idea in a totally other direction. When the others agree it works, that is where and when the next step is contemplated.

What is Dury Dava? It is a band from Athens in Greece, a five piece consisting of Karolos Berahas (bass, keys, synth), Giorgis Karras (electric guitar, dilruba), Dimitris Mantzavinos (vocals, electric guitar, bouzouki), Dimitris Prokos (clarinet, synth) and Ilias Livieratos (drums, percussion). Together they rehearse in a basement and this is the outcome. Mostly live recorded tracks that mine influences from decades long before these men were born. Singer Mantzavinos sings in his own language, so it is anybody's guess what he's singing about, but it may well be that it would be hard to understand him would he have sung English. It is more about the melody that the words is my impression.

The music is as eclectic as the cover art. At times it sounds like symphonic rock albums from the early 70s and not much later all references are yours to decide. One thing is clear, it is impossible to predict what will happen next on this record. Dury Dava surprises every single minute of its first album. Some parts the listener just have to sit through, other parts are brilliant, others simply totally weird and the changes happen within each song. As I wrote a true musical adventure. It just is.

You can buy Dury Dava here: