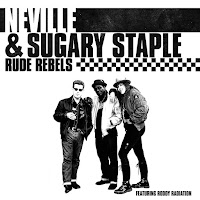 It's 2019. Anyone having lived through the late 70s and early 80s will recognise the lay out of this cover art immediately: 2 Tone. The label that gave the world The Specials, Madness, The Selecter. Bands that played ska on speed and all in black and white. The typical small hats and too short pants over white socks.

Neville Staple was one of the two singers of The Specials together with Terry Hall, with colleague Lynval Golding they went on to form Fun Boy Three. On this album The Specials guitarist Roddy Radiation is present. I haven't heard the new The Specials album (yet). This 2018 variation is one to be heard.

I haven't listened to ska for decades, so Rude Rebels is quite a nice surprise. The album offers a mix of some great fun kicking party tracks with more serious tracks that despite the ongoing beat are clearly contemplative. On this record Staple works together with his wife Christine Sugary Staple. Together they delve deep into the music from Jamaica making full use of the developments of the past 40 years.

Sadder is the fact that the, for me distant, messages from the U.K. that so many youths die in knife fights gets a distinct personal twist here. This album came with a personal message from Neville Staple who lost his 21 year old grandson Fidel to a knifing incident in Coventry. His message makes the fact extremely personal. Losing a child is the worst thing that can happen to a parent. It happened to his daughter. How to stop youths from doing these horrible acts with consequences they are still unable to oversee fully?

The album had already been made before this devastating loss. It seems to have brought out the best in the couple. Not a few times the super group Superheavy came to mind while listening to Rude Rebels. This album is far more down to earth. It has an enormous vibe, like in for example 'Original Rudegirl Sound'. This song has such a positive drive, so light-hearted while keeping that Jamaican rhythm going with enough U.K. sounds to make it a total hybrid beast. Sugary Staple makes for a huge party and pulls it off like it doesn't cost any energy at all. Were I to be asked what is the positive difference between The Specials and this album, my answer would be positive vibes and party time the music exhumes on Rude Rebels.

Rude Rebels took me totally by surprise in the most pleasurable ways possible. It is so much fun. More so than The Specials ever were. 2 Tone in 2019? It is found on Rude Rebels.

You can buy Rude Rebels here: