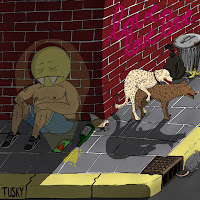 Tusky entered these pages about a year ago with its debut album. The band returns with a six songs mini album in 2019 and what an album it is. No, I will not be playing it when the rest of the family's home. On my own though, it is the ideal energy boost and release in one.

The more or less punk influence of the release is set aside for a modern rock punk version like System of a Down was so good at at the start of this century.

With a cover, a naughty version of a fairly recent Red Hot Chili Peppers album, that surprised me somewhat because of this RCHP connotation. Musically the bands are miles apart. Tusky holds no bars and goes full out. Simply because it can.

As should be known by now, Tusky is a band that rose from the ashes of John Coffey. Where I could not really listen to that band's songs, Tusky plays the right notes for me. I don't mind loud songs at all, but do mind a lack of (good) melodies. Tusky has them aplenty. In between the onslaught the band creates within its songs, there's always room for a melody and a surprise or twist in the song. And, yes, that was why I liked SoaD so much at the time. As the total madness between the two Armenian-American singers can never be fully replicated comparisons stop there and rightly so. Tusky is a power in its own right.

From the get go Love Love Love, a contribution to the 2019 rehash of the love festival at Woodstock at 50, pushes in the pedal and, almost, never leaves the metal. 'Jawbreaker' has a killer riff starting the song, a metal break that introduces the nearly shouted vocals. During the song all sorts of musical surprises come by, showing what Tusky is capable of. The light and the dark divided neatly in the vocals gives the song the air it needs. Tusky manages to add these elements to each of the five songs on Love Love Love, exactly the reason why I like this EP so much. On the other hand, if this is the soundtrack for the summer of love in 2019, God help us all, :-).

Whatever you would like to call it, to me this is 21st century rock the way I like it. So keep it coming, gentlemen.