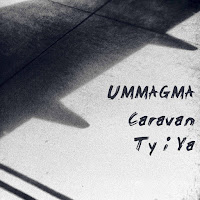 The third post for today comes from Canada and is a single by a band called Ummagma. The music fits more with yesterday's post about Jon Bryant. Here you go anyway.

Caravan is a dreamy song, propelled by soft but very distinct electronic beats and pulses.It all starts with a firm drums though. Solid and fairly busy. It is everything that goes over it that creates this dreamy world. The many sounds, the floating way of singing. At the same time the title song can be extremely direct. There's nothing left to be desired when the lead guitar shreds everything around it to pieces. The song end with simply a dreamy sequence of pulses and sounds.

Ummagma is a duo that formed in Moscow in 2003. Singer Shauna MacLarnon is from Canada and Alexander Kretov from the western Ukraine. Caravan is the first song released from the duo's upcoming, third album, 'Compass', to be released in June. Now both residents of Peterborough in Canada, they are ready to release their first album in seven years.

Caravan is a strong song where many influences from the 80s come together. From U2 to Simple Minds, traces can be found in the song, but only to let Ummagma do its own thing.

'Ty I Ya' is the b-side to this single and not to be found on the album. Kretov sings it in his native laguange over an ultra light sort of pop song with disco guitars and light beat. The Nile Rodgers/Bernard Edwards of Chic funk is in full operation in this track. In the bass and in the guitar the influence is there. Around it things are far less direct, giving 'Ty I Ya' the same dreamy quality Caravan possesses. The dreamy interlude takes the pace away to float the song off into a psychedelic sequence, including a jazzy atmosphere. Before we return to Chic with an Absolute Elsewhere synth sound to add to the flavour. 'Ty I Yi' is strange amalgam of songs and sounds but it certainly has a positive vibe that makes me come back to it.

Two in part very different yet in outlook fairly identical songs that make up a nice introduction to Ummagma. I hope to find out soon how this comes across on a whole album.

You can buy Caravan here: