Pulling Out All The Stops. Geoff Palmer 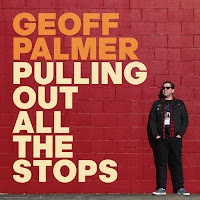 Blimey, where are the brakes?! I feel like I'm back in 1989 in the back of a rental Volvo being driven at breakneck speed through the rush hour traffic of Los Angeles' highways. As the guy driving refused to slow down, I decided to look out the rear window and was presented with a spectacular sunset. So I won some. If I remember correctly he did crash horribly at a later date, but lived to tell.

This is how I feel listening to Pull Out All The Stops. Geoff Palmer keeps the speed up, but it is the lovers of The Ramones style punk pop music who win out major.

With Brad Marino Palmer plays in The Connection. In 2019 they both release a solo record. Just imagine what a record could have been, had the best songs been put on a The Connection record. Give away, it would have been two records. After the great 'Extra Credit', Geoff Palmer gives the world Pulling Out All The Stops. The title is so right, as the songs must have come pouring out of him. No bars left to hold them in a major gush of inspiration. The joy of having found these songs gushes from the record. Geoff Palmer and his band obviously are enjoying themselves if not having a great time while recording these pop gems.

Although I realise that had I been from the U.S. I might have given totally different references. In the 80s a lot of things passed me by, so also U.S. bands like Hüsker Dü, Dinosaur Jr. and The Replacements, bands a lot of people mention in connection to songs like this. I don't. Perhaps it is time to do some catching up. For me listening to Pulling Out All The Stops things deep down start with the fired up rock and roll covers played by The Beatles like 'I'm Down' or its own 'I Saw Her Standing There'. Superior rock and roll pop songs, super catchy. From there it is easy to land circa 1978, the punk of The Ramones gets a little touch of the powerpop of The Romantics and the pop feel of Blondie. Solidness gets mixed with melody. Sixties and seventies blend into one.

This album is filled to the brim with fantastic melodies, punk hooks and powerpop licks. There are so many little melodies or single notes adorning the up tempo pop songs that fans of this music must think they have died and gone to power-pop-punk-heaven.

Although Pulling Out All The Stops is more one-sided than 'Extra Credit', in my opinion it has surpassed it in melodic prowess and energy. It isn't until the 11th song, 'Paper Heart', that Palmer changes the mood and content somewhat, without losing any on the quality. This song is so warm, thanks to a Hammond organ going at full blast. It isn't until the very end that I seem to have had enough and only there and then.

But like I wrote before, The Connection must be a fantastic band, I had never heard of before. Something to be on the look out for. In the meantime I am enjoying myself with this extremely pleasant blast of energy.

You can buy Pulling Out All The Stops here: