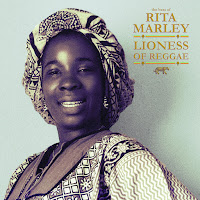 Today once again three short reviews. The second one about a musical style that is quite unusual for this blog.

Rita Marley? Of course I know her as the wife of and as back ground singer in his band. What I was not aware of was that she released records under her own name, let alone she can claim a stake to a 'best of' album. Here it is and I've listened to it.

Reggae is not my natural musical habitat. I have grown into some of the bigger hits over the years. They are more or less the same for everyone of my generation. Songs I sing along to like every one else when they come by on the radio.

The first surprise listening to this album is that I know the song 'One Draw'. Was this a hit in NL? It may well have been in 1982 I find. The familiarity remains there. The rest is new. Like reggae music is supposed, to the music slowly progresses certainly making me want to move in a slow but decidedly content way.

Rita Marley is not a great singer, but her voice is made for this music. You can hear here voice bending with the reggae riddims. Slow, fun, spot on. The slow 'A Jah Jah' is a nice song that shows a band like UB40 how it is supposed to be done. What I can't tell though is whether this album is a truly good album. For that my knowledge of reggae beyond some Bob Marley songs and yes, UB40, is too little developed. That judgement others need to make. All I can share is that while listening to The Best Of is that I'm enjoying myself with the album. Despite the fact that this album obviously could have been made in 1962 with Nancy Sinatra, just by altering the arrangement of the songs, it is nice. Nostalgic and sweet. There are moments that that is enough.