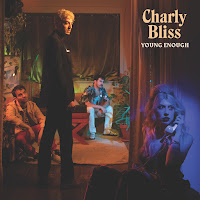 What a dilemma. Charlie Bliss is a band that makes the kind of guitar oriented, alternative rock I truly like. It ticks a lot of my boxes a lot of the time. But what to do with the voice of singer Eva Hendricks? A childlike voice of the kind heard after an adult inhaled some helium and then lowered again artificially. It is a barrier I run into hard listening to Young Enough.

Over 40 years ago I read my first Agatha Christie. Who knows what it was about, yes, a murder of course, but I remember a man walking down the street. From the opposite direction comes the most beautiful woman he has ever seen. When she spoke to him the sound was so horrible that he was totally turned off within a second. Eva Hendricks is not far from turning me off from Charlie Bliss. To lay all the cards on the table: the first lines simply come as a total shock.

Fact is Charlie Bliss knows how to write, arrange and present songs. Without ever going off the deep end, it simply rocks in a neat way, the songs are in good hands. This band has a keen ear for details that enhance songs. Those little melodies, the use of dynamics, all in the right places. In short the music and melodies win out when all is said and done. To lay my second hand on the table: the music of the first song gets to me as well.

Charlie Bliss is a four piece from New York City, Brooklyn to be precise. Next to the singer and guitar player the band has three other members: Spencer Fox (vocals, guitar), Sam Hendricks (drums), and Dan Shure (vocals, bass). When listening to the album the listener will find some keyboards in a prominent roll. I can't find who plays them. After 2017's 'Guppy' Young Enough is the band's second full length album, having released an EP in 2014 and several singles after that year.

Charlie Bliss is a tight outfit. It is from this mold the band allows itself some frolicking. Not before though. This spirit gives the band itself a musical identity. By playing with the layers that create the tightness, a dynamic environment is created that gives Young Enough another part of the quality it contains within itself.

When I notice that by the song my inhibitions against Eva Hendricks' voice often, not always, dissipate, Young Bliss has scored another point. I'll admit that towards the end of the album my interest slowly wanes but by then Charlie Bliss has long made its point. This is a band that loves to look at the past for inspiration while living in the here and now where sounds and recording techniques are concerned. The mix is just fine.

You can buy Young Enough here: