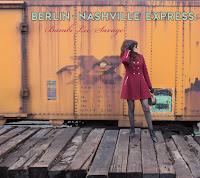 Another American country singer I have never heard of before is presented to me. Is this my type of music? The answer once would have been a decidedly no. Yet, I notice that Bambi Lee Savage, what's in a name?, seems to do everything right. Shannon Strong, as she is known at the registrar's office, is a fitting name as well.

Stemming from Florida she lived in Europe, worked in Berlin as assistant engineer on 'Achtung Baby' and 'The Good Son', in the Hansa Studios before embarking on her own musical career. Somewhere along the line she discovered her country roots and here we are with Berlin - Nashville Express. With her Christian roots rediscovered as well, Savage's U.S. story is complete. In that sense the U.S. and Europe are so different.

Her laidback, fairly thin voice suits her music. Around her musicians from the likes of Mick Harvey to Nashville studio musicians feature colouring in her songs. What they all do very well is making each of the ten songs come alive and sparkle. This is the outstanding feat of this album. The songs at heart may all be elementary three chord songs, the way they are delivered makes them stand out, some even special.

Reading her entry on Wikipedia two songs are mentioned that were recorded in 1995 but not released to date, 'I Can't Count On My Man' and 'Demon Alcohol'. With a new version of her best known song 'Darlin'' on this album, it clocks three older songs. Fine by me, as they are all new to me. To return to the first mentioned song, because it stands out to me. The conclusion she draws in the lyrics is a resigned one and rather sad conclusion. The way she sings it is upbeat though. That could be because nearly a quarter of a century has passed since that discovery or it could be that she found out she's a strong, independent woman, strong, I told you so about her name, enough to handle her discovery.

'Drinker Of Gin' has a decidedly upbeat mood. Yes, she was born again and proud of it. Shouting from the rooftops she is. I am happy for her as I'm happy with myself being so happy to be independent of it all. It would make a strange duet though. The music totally blends with her message. The message continues with 'Walk In Love'. Strangely the song reminds me of Chuck Prophet's 'Jesus Was A Social Drinker'. The lyrics don't mix here. The music again is so strong. Bambi Lee Savage is on a roll here. The harmonies and the pedal steel have such a strong presence. The Hammond organ is warm and uplifting. If I ever get the opportunity I would not mind to sing along loudly to this song.

Berlin - Nashville Express is an album that was long in the making. Some songs have their origins in the last century. All in all it was seven years since her last solo album, this one being her fourth. I have waited all my life for mine to cross Bambi Lee Savage's. We took our time, but it decidedly was worth the wait. Her new album is a pearl in the Americana-country style with just enough small influences worked in for me to remain firmly hooked on. Somehow every song seems to take the exact right change in the chords and melodies. Yes, they will all be the logical one to take, yet sound so right it sticks out and draws me in. Her oh so pleasant voice does the rest. The Berlin - Nashville Express is the train to catch folks.