Every Breath Smells Thank You. Aleph The Hawk 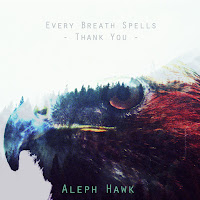 A few weeks ago an email reached me from an unknown address, so in the spambox it sat as it should be. It proved to be trustworthy, including a request to listen to the album and consider a review.

It turned out to be a pleasure, this request. Aleph the Hawk, Steven Depoorter in daily life, is also involved in Firefang. A quite different beast that is (read on here: http://wonomagazine.blogspot.com/2017/02/firefang-firefang.html). In fact I'm fearing Depoorter may suffer from schizophrenia. My bet is he knows and thrives on it. Both identities create great music it seems from listening to them.

Under the name Aleph the Hawk, he dabbles in Americana and alt.country. So those interested settle in and let this slow but intense music wash over you. That's the way it works optimally for yours truly.

Things are kept small on Every Breath Smells Thank You. The setting is acoustic and remains thus. A guitar, a banjo that is a big part of the story. It remembers me of some of the most intimate songs of Neil Young, including part of that brooding darkness Dinosaur Sr. was able to play in the mid 70s. 'Lotta Love', some songs on 'Hawks & Doves' (1980) and especially some tracks on 'On The Beach'. Like Neil Young a piano can pop up and of course a harshly blown harmonica. It makes for interested listening, despite the fact that most songs remain in the same vein for the whole album. The changes are minimal but oh so pleasant.

Around Depoorter there is a host of musicians playing with him on the other instruments. The rhythm is created by strings instead of skins. The banjo, a stand up bass, acoustic guitar. Like in 'Tracks Of Ore' it is the flute that takes the lead and the ladies who come forward out of nothing to sing a counter melody. Just like a violin that can come in for a soft support. The melody reminds me of a folk melody from long, long ago. Just a piece of music assisting the tale that needs to be told. this is meant to be listened to intently. Only then the true beauty of the music will come forward.

Aleph the Hawk manages to keep things intimate and interesting. The approach is more alternative than clean. More (extremely) interesting than aimed at pleasing. He is not afraid of showing rough edges in voice and instruments. At the same time in a way the opposite effect is reached. The music on this album is special and shines like a glow in the dark. A point where people are drawn to, irrespective of possible consequences in that dark. Fascinating stuff.

31 December is a strange day of the year to release an album. In multiple ways. But from what I just wrote it makes total sense. Glows in the dark, potential, dangerous consequences, fascination. It all sounds like New Year's eve to me.