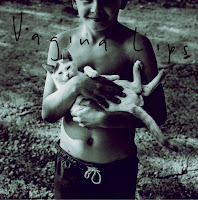 Another release from Inner Ear Records in Greece and another one that instantly struck a chord with me. The band name? Okay, let me pass that one by, yet it does create expectations. I had expected to hear one huge crate filled with unnuanced punk or hardcore and mad shouting by a singer spending his vocal chords in the fast lane. Instead Generation Y presents me with deliciously nervy new wave in the best The Cure tradition mixed a more modern directness. Those looking at the promo photo below do not have to think too hard what more modern influences of this band are.

It is here that Vagina Lips delivers fully. Hard times shine through in the dark mood that settled itself over all the songs. The singer obviously listened to Ian Curtis and the other dark princes of the post-punk era. Yet, if the band had stuck with this part of the musical pantheon I would not have been writing as enthusiastically about Generation Y. The mood, tempo and outlook totally change during the album, showing a contagious side to its music.

Vagina Lips is guitarist/singer/songwriter Jimmy Polioudis, a.k.a Jimmy Lips in Thessaloniki, his home town. Having started in 2015 as a duo, with Konstatinos Iosifidis on drums and vocals. Together they have released several DYI records and tapes. This is the first release through more conventional lanes. Nowadays Konstantinos or 'Lostinthe' is Vagina Lips' producer. Guitar, bass, drums and some extra layers of guitars is what is on offer and together with a synth here and there that's enough. Either the depri voice or the more upbeat voice of Polioudis accompanies the music and sets part of the mood.

The album kicks of with a huge riff with a higher pitched drone moving through it. A big, fat bass joins in as do pounding drums. "I know, it's the good life"; musically the observation could not be more true. The lyrics continue "my whole heart is black". All things considered I'm inclined to stick with the former. An artist at times suffers for his or her audience to enjoy the musical outcomes of this suffering. And, boy, do I enjoy the outcome here.

The Cure sets in on the second song. The fast paced song sets a great mood and puts the album at a higher level after a great first song. 'Boy June' is hectic, all is fast. The guitar solo riff is classic The Cure and comes off great here. Vagina Lips can not be accused of originality but most certainly knows how to use its influences to the best of its advantage. There are not many songs by Robert Smith c.s. that I appreciate as much as I do 'Boy June'.

The good thing about Generation Y is that the level of music continues. The tempo may come down in 'Destroy Me' the quality does not. Especially when the mood changes to a little more upbeat and up tempo songs, I am enjoying myself more and more. 'Lo-Fi, Hatred And Dinosaurs' is anything but a song I'd identify as lo-fi. A full band sound, a great riff on a keyboard, the drums pounding on and on. Intriguing title. What has it all to do with one another? The lyrics are all about unrequited love and ensuing heartaches.

When Jimmy Lips sings with a softer tone in his voice like in 'Like Fire' it takes nothing away from the whole. The mood is slightly changed, while the music does what it is supposed to do on this album: exhume an 80s vibe and rock like the end of our days are nigh. Which may be more true than we can comprehend and manage to care for on a daily basis. So, for all who are deeply concerned about climate change, the extinction of insects, the rise of the sea level, etc., there are worse soundtracks to enjoy during serious worrying. Especially when the light-toned 'Fall In Love Again' comes around.

Would Generation Y have been "a hit" with "The Bats" as we called the dark clad, boots wearing, Robert Smith haired group always huddling together, sulking in the corner of a dance floor circa 1987 until The Cure or Joy Division came on and they took en masse to said dance floor? The songs with the lighter tone? Never. The others? Most certainly.

As I wrote before, until recently I had no idea that Greece produced music like this. It is a privilege to be able to share my recent discoveries with you. Vagina Lips is one to watch.

You can listen to and buy Generation Y here: