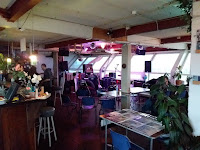 With signees to the Tiny Room Records label one gets places. After visiting the Vondelbunker earlier this year, now Amsterdam-North at the edge of an industrial estate soon to be turned into a residential area was the location this time. De Ruimte is not unlike a bar in student dormitory only somewhat bigger. A special feature is the windows tilting outward somehow creating the impression of being on a ship's bridge.

Unfortunately when I walked in out of the rain (having moved from the waterfront), I was the audience and even more unfortunately things did not get really better during the three shows. Those who stayed at home did not get wet, but missed three shows of circa a half hour each that all, in their own way, were memorable. 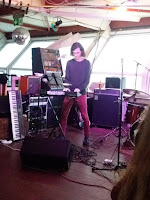 Where to start with Memory Fish? One man, one small keyboard producing beats and somewhat changing sounds per song yet always dark in outlook. Lyrics that seemed to be made through a cut up technique by throwing lines up in the air and randomly assemble them into a lyric. With one exception: in each song "Charlie" is told something, explained something, dissuaded of something, etc. In a way this act was extremely fascinating. It was also the first time I was sitting with the lyrics in my hand. But that is as far as I can go. This was not for me. The monotony of tone, sound and songs were not able to reach nor touch me in a positive way. There is an album called 'The Horses Are Still Running", Charlie, I automatically add in my mind, I notice. So totally untouched I was not by Memory Fish. 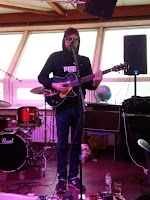 Next up was Astral Swans, the name under which Canadian singer-songwriter Matthew Swan releases his songs. His guitar tuned in such a way that with just one finger barring the frets he was able to play nearly each song. As such the two shows were in fact somewhat alike. The main difference is a melody, no matter how elementary played on the guitar, is instantly discernable, the lyrics understandable, creating an impact in the first lines: "I had a dream I killed all of my friends". Add that Swan's singing voice is so much pleasanter to listen to and there's a winner. What struck me, is how a singer-songwriter can have an impact with so minimal tools to work with. The accompaniment on the guitar was almost beyond minimal. More percussive than melodic. It is all up to the voice to create the effect. And it did. Of course it helped that I knew most of the songs, but even then. Astral Swans has an effect on me. 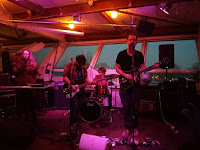 The afternoon was closed by Howart. Bravely overwinning some electrical issues at the very start of the show, it did not seem to affect the players at all. Howart is a band of Tiny Room Records celebrities accompanying singer/keyboardist (and painter) Anneke van Nieuwkoop. Together they work out songs in a way that moves in a direction of post rock with some progrock elements woven into the whole. In a new song I had the impression Howart could work itself up to the Earth & Fire of the 2020's. The Earth & Fire of the first 4 years, not the disco and reggae version of a few years later. After the two singer-songwriters sonic storms, feedback, all sorts of effects and noise were released on the few people in the audience, but always to a great effect. Something happened in De Ruimte, I had not expected. The music certainly does not fit the soft-toned artwork by Van Nieuwkoop accompanying the record. This is music that bites, hard at certain points, before releasing and returns to a hibernating phase. Impressive is the right word, good the one that follows up close.

Afterwards I went home with the 7" single released by Tiny Room Records by Bonnie 'Prince' Billy and Naked Shortsellers and a 12" to be released early next year in my bag. Through the rain I moved on back to the waterfront to catch the ferry to Amsterdam's Central Station. The last shows of a year that brought so many fantastic ones.

Here's more on the artists on Tiny Room Records: