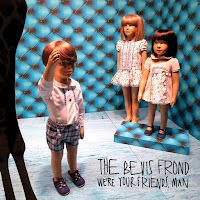 The Bevis Frond is around for longer than I can remember, if only because I had never heard of the band until London based Fire Records started to re-release albums from the 80s and 90s by the band. These re-releases let to a few reviews in the past years on this blog. So when I received an alert from London on another release I expected another record re-seeing the light of day in the 10s. I could not be further from the truth: We're Your Friends, Man is a brand new album filled with blistering guitars and fiery rockers.

Recording records under this name since 1986, Neil Saloman has carved out a modest space for himself. There are records under other guises since the late 70s. Is there a place still for this loud (classic) rocker who is not afraid to serve a delicate ballad with Hammond organ, acoustic guitar and all? I would say yes, unequivocally.

The Bevis Frond does not take the easy road by copying Deep Purple or Black Sabbath. For that the element of the 80s rockbands is too highly present. As well as soloing right through it all like on the one hand Neil Young does and on the other Slash. Two guitars battling it out: one in my left ear, the other in my right. One in a deeper register, the other wailing away. Both totally going for it, seemingly oblivious of the other's existence, yet blending perfectly. The duels give several songs on We're Your Friends, Man something exciting as well as a deeper layer of inner tension. So the alternative rock of the Boston bands from circa 1990, Dinosaur Jr. and Buffalo Tom are not far away here either.

The guitarist in me loves what is going on here. Saloman shows hardly any restraint at all and goes full out with layers of guitars. Different sounds, different effects and attack. When listening closely the harmonies in the different guitar parts show up just fine. They compensate for the rather flat voice of Saloman. His voice is competent, not outstanding. It has one register and sticks to it firmly. The contrast with the guitars is rather large. This singer knows his constraints and copes with them adequately.

There is a downside to this album. With 20 songs it is extremely long. Somewhere halfway I am totally served, content and full. It is not the quality of the songs that follow, simply too much to take in one go. Yes, I realise that I'm writing the same comment in two days. Yet this is different. I want to hear more, just not now. With City and Colour's live album I had had my fill after ten songs. So, I simply start We're Your Friends, Man at song 11 next time I play it. Following this adventure further down the road.

The Bevis Frond is an obscure name in the history or rock bands. This new album will most likely not change this position. Yet, if you like alternative rock I would give this album a chance. Chances are you will make a discovery with loads to discover in the back catalogue.

You can listen to and buy We're Your Friend, Man here: