We The People Of The Soil. Inspector Cluzo 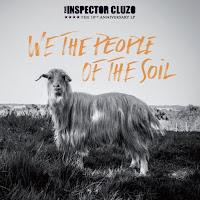 We the people of the soil is a record about farmers. A lot of animals are mentioned in the first lines, but not a goat. Musically the album shoots off in many directions. The imagination of the members of Inspector Cluzo reaches far and wide. A hardcore metal chorus can switch to a soulful Hammond contribution within seconds or a Hendrix wah wah guitar. In short, there is a truckload of discoveries to make on this intriguing album by a band 10 years on route. With a name commemorating Peter Sellars' most memorable character (although "Chance Gardener" comes close).

Inspector Cluzo is a French duo, Laurent Lacrouts and Mathieu Jourdain, releasing its sixth album in those ten years. Until this album, the Rockfarmers as they are nicknamed, has kept everything within its own fold. Not so We The People Of The Soil. They worked with Vance Powell of Jack White, The White Stripe and all other White incarnations, but also e.g. Arctic Monkeys and Wolfmother fame, in Nashville to create this giant of an album.

For a duo Inspector Cluzo is able to create a huge sound. Not unlike many another duo setting of course, but no matter what, huge noises have to start with a song to attract me for longer than just a moment or to. And songs this band has. Of very different elk to. The wall of sound is just as easily traded in for an acoustic guitar and a whistle. Of course, like most duo bands Inspector Cluzo can never reproduce this all on stage. As I'm not primarily interested in constraints, I'm happy with what I'm hearing. A warm organ, tinkering on a piano. This band knows how to make itself sound interesting and above all good. 'Little Girl' is a smaller song, but the one showing Inspector Cluzo can do much more than wrapping a good song in loud music. When the guitar kicks in again for the title track it is so welcome. Slightly funky, holding back, while the voice is already announcing what is happening next soon. The kind of song I've not heard Dan Auerbach/The Black Keys writing since 'El Camino'. I was already convinced about this album, this draws me in even more. 'We The People Of The Soil' is a great song. What a chorus! Fantastic dynamics!

The folky 'No Deal At The Crossroads' with some spaghetti western, Ennio Morricone elements woven into the schmalzy interludes, changes the mood yet again. Don't think that I've started using examples somewhere into the album makes a difference. I could have started with song one or seven, it would only provide different examples to an identical story. Inspector Cluzo dares to change its tune many times, creating a versatile yet oh so interesting album. Far more so than The White Stripes and closer to The Black Keys. We The People Of The Soil holds a pop element or two, even at its most extreme, 'Pressure On The Mada Lands'. With Tyler Bryant as a guest on guitar.

There is so much to discover on We The People Of The Soil, it is too much to mention. My take is that it is your turn to go on this adventure. For those still buying cds, it comes in a special form including a book. So take your chance.

You can order the album here: