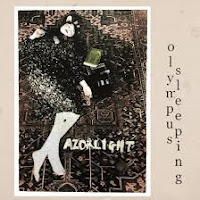 "Genie, this is Aladdin. Can you give me a Razorlight album that doesn't like totally suck?" is the first thing I heard putting on Olympus Sleeping. Huh?, I thought, what an insight into oneself?

I faintly remember owning a Razorlight album that must not have left its station in life since somewhere in the 00s. Looking it up I did find the debut album by the band, that never totally convinced me. One of those many half-miss buys of a lifetime. All albums that followed did not convince me at all, including the hitsingle, 'America'. The band dismembered and was left behind on the pile of musical oblivion.

When a new album reached me, I was mildly surprised, most bands tend to return at some point, don't they?, not aroused. It was lying on the stack of new releases, waiting to be taken off at some point. When it finally did, I was surprised anyway. What I heard was a pleasant pop, rock, even punky album, pressing its presence on me. Razorlight is back and perhaps better than ever. Although Razorlight is back? It is more that Johnny Borrell decided to use the name again. No other founding member is present and only David Sullivan Kaplan, who joined only a year before the band disbanded in 2010, returned.

Does it matter? No, I'm listening to a collection of fine pop songs recorded under the name Razorlight. Like many British (neo) Britpop bands, Razorlight was much bigger in the U.K. than on the continent, so using the name commercially is a good move.

What I notice is the upbeat atmosphere that is flying of this record most of the time. Nice little guitar licks are all over the place and the tempo is firm. Borrell seems to be in fine shape and has come up with several great songs. There's no fear for kicking in the jams right here. Punky moments are woven into the Britpop melodies like it's 1978 again. Those little sparks of inspiration, like a 'Lust For Life'  drums, some The Jam, The Undertones and the likes. They have all found their way into the mix on Olympus Sleeping.

It is when the gas goes off in 'Iceman', where the album has a small dent. Nothing wrong with the song, but it doesn't do much to me. It is also a little bit of a neat The Libertines song. Luckily with 'Sorry?' things are mended fast. A 60s garage rock lick kicks Razorlight in the butt in the right place. That the ending of Olympus Rising is freaking out a little bit is forgiven. Why not? It's the end of a fine album.

If any of the previous Razorlight ever really sucked, they had their moments, Aladdin's wish has come true the whole of the way. If Borrell and colleagues are smart fellows, I would keep rubbing that lamp pretty good in the future. Olympus Sleeping? If Olympus is Razorlight, they're awake alright.