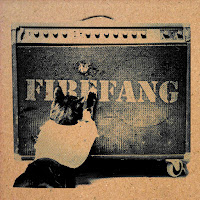 Rock and Rolllll!. Johnny Winter's cry out before starting his version of 'Johnny Be Goode' is totally applicable. But when the singing joins it's: AAAAARRRRRGGGGGHHHHHHH! What a noise, what a voice, the screaming is beyond the combined force of the former couple Cobain-Love fighting at the top of their lungs. Had Firefang continued in this vein, I would have quit the record after the first couple of songs. However no voice can keep up this strain without disappearing forever into a hoarse mumble. Ask Al Barr of Dropkick Murphies.

Firefang, apparently an offensive technique in 'Pokemon', does find the knob called dosage. The vocal and musical storm does lie down every once and again. At those moments the music comes close to my Italian friends of Bongley Dead and that is a good thing. From that moment on a diverse rock album plays itself out. Garage, grunge, psychedelic, Neil Young and more. It's all there, without losing an inch on consistency. Firefang rocks out with more and with less intensity or perhaps better with less noise. Intense is a word that does describe the music on 'Firefang' quite well.


Firefang, the studio band, is a trio from Ghent, Belgium. Steven de Poorter, vocals and guitars, Pieter De Poorter, bass and Michael Dupon plays drums. There are guest roles on lead guitar. Beware however as Firefang, the live band, is another thing. Next to Steven de Poorter, there are Bram Lesauvage and Maarten Buyst. Strange, perhaps, but most likely not. It could be a matter of recording an album and look for a live band later.

It is a safe bet to state that Firefang is all about Steven de Poorter. And another that De Poorter has listened with an interesting ear to bands from The Outsiders all the way to Nirvana with a lot of pre-punk-post in between. And with that he does come up with songs that are not only good but certainly very much alive. It's in a song like 'Everybody's Right' that all these influences come together. The Outsiders, yes, the old Wally Tax led band of the 60s, is in the verses after which Nirvana takes over with De Poorter screaming his lungs out. The insides of my speakers may just be colouring red right now. Little bits and pieces of the inside of his throat. It's the dynamics in the song that make it so interesting to listen to. Not just extremes, simply clever and beautiful parts come by.

That switch from singing as if the devil was on De Poorter's tail, caught up and is about to swallow him whole happens in the second song, 'Down', next it gets mixed alternating between singing and screaming in 'Waiting List' and thus the album becomes enjoyable for those who have lived through teenage angst to tell, like myself. With it the album grows. For now, just as long as I'm not obliged to sing along to all parts of 'Firefang', I'm quite alright.

And then a very weird thing happens. In 1994 or 1995 I wrote a song called 'Charlemagne' for a band called The Beerhunters. There was only one, rehearsal room, recording which the drummer took home with him the week before quitting the band, which also was the end of the band, never to return the recording. The chord progression and the way of playing of that chorus, executed very, very much better here, believe me, shines through in 'In A Home'. It can only be a coincidence, don't worry, but extremely surprising.

This small personal experience aside. I notice that after my initial fright with the opening song, I start liking Firefang better with each spin. The album is -yes, a lot of noise, of course- varied, with great mood changes, great playing and loads, truckloads of enthusiasm that makes Firefang irresistible to listen to. It's dirty, grungy, smudged, but all honoured with a keen ear for spotting exciting melodies. So get out your old rags and start polishing. Underneath all that grime is pure gold.

All this started with an e-mail asking me to listen to the album and consider a review. Well, I have and here it is.

You can stream and buy the album here: