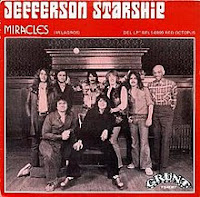 Marty Balin died on 27 September of this year but I did not find out until the evening of 4 December. It had not made the news or I missed it for some reason. Paul Kantner made the evening news two years ago and even Signe Anderson made the newspapers although she only sang on the first Jefferson Airplane album. Balin apparently did not make the news.

I loved this man's voice once upon a long time ago and still several of his songs remain intimate favourites. Songs like 'Coming Back To Me', 'Today' and most of all 'Miracles', that seven minutes tour de force on Jefferson Starship's 'Red Octopus' album.

Like almost all other people in the Netherlands of a certain age, Jefferson Airplane came into my life with a double single in 1970. 'White Rabbit'/'Somebody To Love' became a hit three years after the original release of the 'Surrealistic Pillow' album. Both Grace Slick songs where Balin's role was marginal. A friend had a Taiwanese copy of the 'Woodstock' album. On it Jefferson Airplane features with a blistering version of 'Volunteers'. The intro spoken by Grace Slick is iconic "You've seen the heavy groups, now you will see morning maniac music, believe me, yeah. It's a new dawn!". Jefferson Airplane really took off there and then, with Marty Balin as the high priest of the anti-Vietnam and all other wars movement.

That made three songs I liked and yet I sort of forgot about the band, that faded away itself before 1973. It took a boat trip to London, my dad was a merchant mariner and coastal trips meant a chance at sailing along, when the third mate played a record in the harbour in the ship's bar. 'Flight Log', a compilation double album by Jefferson Airplane and solo stuff. Once at home I bought the album that was on sale. (Later the mate visited for my birthday party and gave me 25 guilders. That was turned into 'Exile On Main Street', one of the best investments ever. I never saw him again as far as I'm aware. So Dick of you happen to read this, thanks!)

From 'Flight Log' I quickly started to flash out my Jefferson Airplane, Jefferson Starship and all kinds of solo stuff, Hot Tuna collection. Although I certainly like the rock side of the Airplane, there soon was a special place for Marty Balin's ballads. In a few of them he seemed to have touched upon some divine inspiration, a source so deep that all became and becomes well. Everything seemed to fit in the universe for a few minutes. Most of all in 'Miracles'. In essence a slick AOR ballad, but one done in a way never done before and never gotten close to by anyone ever again and there's no use trying. The music flows so naturally, like making perfect love with your one and only true love. The miracle of love, the miracle of life and the miracle of joy. Balin captured this all in one song and the band executes it perfectly. The guest saxophone solo by Irv Cox is as perfect as the rest of the song. The climax to the lyrics. 'When I start dancing inside you". Do I need to write more? "If only you believe in miracles, so would I" and off went the sax into the stratosphere and beyond. In its tone and notes, and Balin's voice, the essence of mankind captured in music.

Marty Balin, who was born Martyn Jerel Buchwald in 1942, left Jefferson Starship in the mid 70s and left my musical world with that. The Airplane reunion in 1989 brought once again a few beautiful songs by Balin, 100% nostalgia like 'Summer Of Love', so befitting for the reunion that in my opinion was an artistic success.

Unfortunately I have never seen the band live. It was touring the U.S. in the summer of '89, like I was touring the U.S. as a tourist for the first time, but always in the wrong place. After that I haven't a clue what Balin did musically, until I read that he had died in September accompanied by a photo of an old man with horribly died hair that I would not have recognised if the name had not accompanied the photo.

It is of no consequence. There are a few songs I will keep playing for the rest of my days on this planet, songs that are a part of the most beautiful things man is capable of creating. Marty Balin did just that.