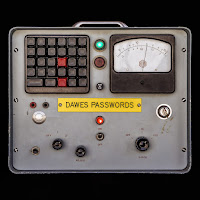 With Now Living Abroad, the new album by The Furious Seasons, I started my review about commenting on a time machine I seemed to have stepped into, taking me back to the 1970s. (Read on here: http://wonomagazine.blogspot.com/2018/06/now-living-abroad-furious-seasons.html) Passwords by Dawes more or less does the same with me. Notwithstanding the loud guitar riff opening the album in 'Living in The Future', a nice title when referring to a time machine, Dawes does take us back.

Dawes was one of the first reviews on this blog with an album called 'Nothing Is Wrong' (read on here: http://wonomagazine.blogspot.com/2012/02/normal-0-false-false-false-en-gb-x-none.html). Ever since I always thought the band did not do what it was best in. In the bio accompanying this release it says something about returning to older days and I can only concur here.

The hard riff reminds me of the second half of the 80s. It is in 'Stay Down' where Dawes moves into the 1970s West Coast realm. The Eagles and Jackson Browne and the whole entourage around those artists comes to mind immediately. The slow delivered Don Henley like vocal delivery. The soft music all around. It evokes a time long gone in a successful and pleasant way.

Taylor Goldsmith seems to have found his Californian voice once again and the sound to boot. Underneath it all there's a lot of keyboards to be found played by Dawes' newest member, Lee Pardini. His keyboards determine a large part of the mood and the moodswings of Passwords. Always subtle, yet very present notes can escape the carpet he lays underneath the music with extreme ease.

For Passwords Dawes reconnected with producer Jonathan Wilson, who produced the band's first two albums. Perhaps that explains why I am so comfortable with Passwords. That is, when I play the album a little louder. In the background this album does not work, for me. It all just sort of disappears into the rest of my life happening. Passwords is not a dominant album. Far from even. Turning up the volume a little unleashes the true beauty of the album. Eagles, Fleetwood Mac, The Doobie Brothers, just a few names that spring to mind while listening to 'Feed The Fire'.

Wilson provided the music on Passwords with several layers that make Passwords simply more interesting. A few strings here, an extra guitar there. Where I thought the most recent albums by Dawes to be one dimensional, that objection has been totally lifted on the new album, with the mostly subtle, yet extremely effective arranging.

In my review of 'We're All Gonna Die' I wrote the band is in need of a few percent more originality (read on here: http://wonomagazine.blogspot.com/2016/12/were-all-gonna-die-dawes.html). I'm not sure if Dawes found just that, it did find better songs or better worked out songs, making this a far better album. So it must have.