The Horror. Get Well Soon 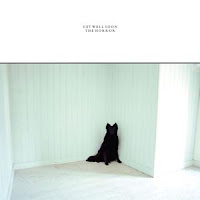 The Horror is an album that was lying around for weeks and somehow I had never gotten around to playing it. Most likely because there was a comment somewhere on dance or beats involved in the bio. The always friendly and gentle reminder about an album, just before release, let me to put it on any way. I haven't stopped listening since.

For your information, I still do not know what to make of The Horror. The title has little to do with the music, all that is in the lyrics. It is like stepping into a time machine. To the very faint memories I have of the kind of music my mother played on the small record player she had and I managed to break as a three year old. That is a very vivid memory. Not so much how I broke the plastic arm of the device, but certainly the effect: there was no more music in our home, for years on end.

So Get Well Soon dives into 40s and 50s pre-rock and roll pop and into film scores of the era. With singers like Frank Sinatra, but also Doris Day, Frankie Laine, Pat Boone. The narrative does not stop there of course. If Get Well Soon stepped into a time machine it took along all its knowledge of modern music and some of the equipment as well. It came back to 2018 with a mix of a modern interpretation of classical music, mixed with 50s hits and movie scores and all the modern effects since, it needed somewhere in between the levels of its music.

On The Horror the seriousness of the music of that time is captured excellently. The songs that I do know, as I never became a fan of older, i.e. pre-rock and roll, music all sound so solemn. They were not meant for joy it seems. Undoubtedly that is attributable to my (untrained) ears, but to this day I do not hear it compared to The Beatles' first hits.

There is one snag with The Horror. The album deserved a better singer. The singing captures the mood but is too uncertain and hesitating in several sections. And that is a shame. The music is intriguing and full of surprises. Whole orchestras can get involved, in ways that were not imaginable in the 40s and 50s. At the same time The Walker Brothers come to mind, if I leave out the wall of sound behind them, the solo work of Roger Waters and even a band from the here and now The LVE from Antwerp. (And once pointed to the music of Japan as an influence, I can't stop hearing David Sylvian's 'Red Guitar'.)

In some of the songs Get Well Soon reaches an immense level of under-cooled emotions in others it can sound totally detached from everything going on around it. Konstantin Gropper is Get Well Soon. A German producer and indiepop musician. And that leads me to my final reference John DeRosa's album 'Black Halo'. A (dance) producer who set loose another side of himself that led to highly bombastic music immersed with influences from long ago.

Get Well Soon is an aural adventure. Perhaps a bit too long for me to take it all in all at once. That may be, at the same time there is so much to enjoy here. Gropper manages to mix several eras in a highly successful way. Who knows, even my mother and aunts would have enjoyed parts of the album.