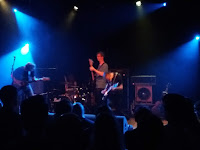 With an invitation to be present at the cd presentation show of HOWRAH I stepped into the train early evening to travel to Amsterdam full of anticipation. Would the band be able to recreate the storm called Self-Serving Strategies convincingly on stage without muddling up the sound? Could all that energy captured on record really be played well live? You can read here what my thoughts are on the record: http://wonomagazine.blogspot.com/2018/06/self-serving-strategies-howrah.html. With a little more patience you are about to find out what my thoughts and impressions are about the live show.

The reason some patience is involved, is that it promised to be a long evening of music. The label, Subroutine Records, staged three of its acts, with HOWRAH as the celebrating finale of course. 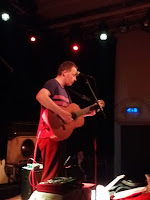 Zea
Is there a better timing to enter a venue at the time the act walks on stage, straps on his guitar and says hi and starts playing? Arnold de Boer is Zea and sings in a strange language. At times I pick out a word or two, sometimes, more not than often, a whole sentence. Frisian is an official language and rightly so when I hear people speak it. Or sing it in this case.

In the first two songs I was more amazed than impressed. Zea plays the strangest chords or endlessly repeated disharmonious notes over which a lyric is declaimed that I can't possibly follow.

Slowly my attitude towards Zea changed. I recognise a singer-songwriter force when I see and hear one; the intensity got more heated by the song. An ever growing tower of strength stood on stage. No one dared to speak or start a conversation around me. A sign that an audience is captured by an artist.

To my surprise half way through Zea switched to another (foreign) language. All of a sudden I could understand everything he was singing. Strengthwise nothing changed. Zea is an impressive live artist.

After the show Marcel Hulst of Maggie Brown, who was in the audience, pointed me to one of Zea's records, saying how extremely good it is. I noticed the title and realised that I had received that album some time ago and was turned off within two songs because of the Frisian language. Listening right now, I'll admit my mistake straight away. Sometimes even my ears are not screwed on right. 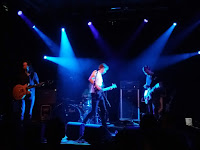 Apneu
Subroutine Records' boys band as Zea introduced them had a very charming drummer for a boys band, I noticed. It was the evening of lady drummers. Apneu cooked up a storm. I had never heard of the band before. Listening to the songs I noticed how good most of them are. And there was one hit called 'Jennifer'. That song ought have been a number 1 hit in any part of this globe.

What I liked about the band is the inventive lead lines on the guitar. A brazen stand, Jonny Greenwood looks and the skills to play, this guitarist can strike a dramatic pose or two as well. The firm fundament under the songs allowed for all sorts of frivolities. By the way, from the looks of it, all four members of Apneu feel comfortable on stage and enjoy playing the songs to the best of their abilities. It all starts there for a band. Apneu has the songs as well it seems. So how come I have never heard of them?

Looking up on the band I noticed two albums and one EP. A lot to catch up on and starting right now. 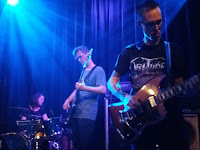 HOWRAH
In my recent review I ended with the sentence: "By the time this storm called Self-Serving Strategies lies down, HOWRAH has conquered all in front of it". Well, live it is exactly the same. The band started with 'Vacuity', so I had that song behind me. From that moment onward there was no looking back. The band was ready for this show, to showcase what is capable of. That was no little. Enormous amounts of echo washed over us, in absolute guitar storms. The snares were shredded in ways the person who long ago invented them could never have imagined them being played. Gijs and Cees are total shredmeisters when they think it necessary. The good thing is that it is never out of the context of a melody or meant to be an overwhelming effect like with a band as A Place To Bury Strangers, where everything moves aside for the effect of shredding. Or when one shreds the other takes care of a tight rhythm or a lead melody or riff. Making a song tighter or looser. Either effect proved a winner. Cees van Appeldoorn's singing live comes across as well as on record. He is able to capture a few moods with his voice in a convincing way, changing between early 80s doom to our  current more frivolous if worrying times. When it all was over and the whole album played, it was clear a band had played. Not just some show, no, a band had played, leaving no one unconvinced and untouched. There was no need for an encore, nothing. We were all spent, yet totally fulfilled.

HOWRAH is ready for some nice steps given half the chance. The album is there, the live set is there. So go for it and book them. It doesn't get much better than this in this alternative rock genre.

After a long evening of music I walked out the Paradiso with an album under my arm. To my surprise it wasn't dark outside yet.  The north-western sky was still alight. Summer can trick a person.

You can listen and buy Zea's music here: