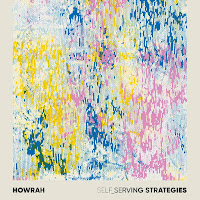 Self-Serving Strategies starts unbelievably self-assured. HOWRAH goes in with two legs stretched forward, no mercy for the suffering here. 'This Chemistry' has an intro so loud and so all breaks loose that HOWRAH has made its point and scored three goals before the opponent knew it was on the pitch. Totally in line with the title of the album of course. If a band is not self-serving then who will serve it?

HOWRAH is a band from Amsterdam formed around singer-guitarist Cees van Appeldoorn. All band members have made a name for themselves in other bands, some better known than others. The influences mentioned by the band range from Dinosaur Jr. to Sonic Youth. In the enthousiasm of playing I would certainly add the early U2, while in the singing early 80s heroes like Jim Kerr and The Comsat Angels' Stephen Fellows come to mind. Van Appeldoorn has that same element of impending doom in his voice; when he wants to.

Underneath his voice intricate melodies are played by a layer of guitars. If the 80s have returned it is here in the way of playing and interaction between the two guitars. The drums fill the sound totally. There's never a dull moment here and the bass is never far behind where the filling of the sound's spectrum is concerned. It allows for the guitars to be playful, even when played as rhythm. In fact the guitars can do most anything while always serving the song. The mix is a strong one.

So what kind of music am I writing about? Alternative rock, I know. Yet, Self-Serving Strategies has nothing to do with scoring a quick hit by playing a lot on a guitar. The album is full of odd balls. Songs that can hold an estranging chord or note easily without being side tracked. Just like a band as M-Jo or the late Chinup are good at. HOWRAH does not deal in niceties and beauty at first sight. Often somewhere behind a bewildering forest of weeds and maquis beauty is hidden. Like the pearl in a swine's sty.

The more I've listened to Self-Serving Strategies the more I hear that beauty. Except in 'Vacuity' the song that set me on the path of HOWRAH. That remains a dark, brooding and one-dimensional song to me, that I can't find the key to. The rest of the album is filled with songs that are at a minimum extremely interesting right up to very good.

With HOWRAH I have discovered another Dutch band that can easily compete with many bands from where ever and is more interesting than a band like The Comsat Angels ever was. By the time this storm called Self-Serving Strategies lies down, HOWRAH has conquered all in front of it.

You can listen to Self-Serving Strategies and buy the album here: