"There's a rock show at the Concertgebouw", Paul McCartney sang in 1975 (and it rhymed to believe or not for a Dutchman.) This proved not to be the whole story, as Stargaze and guests Anja Plaschg, Anna Calvi and Laetitia Sadier showed. Together with composers Jerek Bischoff and André de Ridder they all worked on a reinterpretation of the Blackstar album and a few other songs by Bowie. So in the end it wasn't exactly a rockshow at the Concertgebouw but a form of hybrid between rock, jazz and classics that worked like a dream and, I'm sure, would have made David Bowie proud. His final work transcends all time, space and musical genres in this interpretation.

The story surrounding Blackstar is known, I presume, so does not need repeating here. (Read my review here: http://wonomagazine.blogspot.com/2016/01/blackstar-david-bowie.html) Fact is that Bowie's final album has been put up in rock's pantheon as a masterpiece. Time can only tell that for certain, as the circumstance following the release certainly contributed to the impact of the album. Two and a half years later I can only say that the album holds up totally and still gives away some details each time I listen to it.

The Concertgebouw in Amsterdam is a beautiful building, once slightly outside of the town that was catching up with its location and overtaking it at a tremendous building pace in the 1880s and 90s. A city bursting out of its early modern age surroundings within the canals. I had never been inside before, so took it all in. A fairly sober interior, much more so than I had suspected. The names of still famous and more or less forgotten composers adorning the walls. A huge stage in front of the floor, where all the seats had been taken out. Persian rugs were laid on the floor. Several people sat down immediately, as if the Paradiso of the pre-punk 70s was back in fashion. A large organ hanging on the wall at the back of the podium. It was used to.

Stargaze is an orchestra of classically trained musicians who enjoy making a cross-over to modern music, also in cooperation with bands. The idea for this tribute started with reworkings both Jerek Bischoff and Andre de Ridder made of Blackstar, independently from each other. From there things slowly got together and here we were for a fairly unique show and unique collaborations that may never happen again. 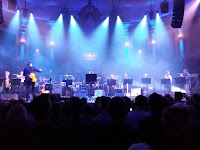 A show that started with 'Warszawa'. The ominous instrumental song that, to me, really started Bowie's "Berlin period". The brooding sounds created with Brian Eno, were played by classical instruments and of everything the bass version. The longest, yet small, saxophone I've ever seen. A sort of double flute. All producing the dark sounds of 'Warszawa'. A song I could not listen to, really, at the time. The song Bowie opened his 1978 tour with, standing behind a small synthesizer. Things change. So do the tastes of a young man who has grown up. I really do not believe I would have liked Blackstar when I was 18 or so. In 2016 on 8 January I was surprised, shocked, moved, shaken, impressed, conquered, smitten. All within 24 hours of listening to the album over and over.

Blackstar was played in one go. The lady singers changing places to sing lead after the duet of 'Blackstar' between Calvi and Plaschg. The intricate arrangements fully recreated the very dynamic and electric album in a near organic form. The director played a bass guitar here and there, next to a very limited amount of electric guitar. Some orchestra members changed more instruments than Ferry Heijne during an average De Kift show. The organ player climbed the organ and back when needed elsewhere. Odd rhythms and odd sounds are an intrinsic part of Blackstar and in the tribute. The director was counting a lot before the orchestra could star playing. This part of the show was over far too soon. Ms. Sadier was less at ease it seemed, but she came through beautifully with a little help (as in counting) from the flute player, who also sang a beautiful harmony. 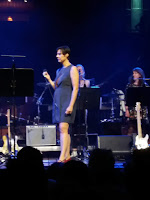 The orchestra gave us a finale with 'Ashes To Ashes', always a favourite, 'Space Oddity', my first and greatest Bowie love. A lot of singing along was allowed and the audience did not need a second prodding from the conductor. This was a celebration of the love for Bowie's music for and from all involved. Orchestra and audience sang together, while only the violinists were at work for us. It ended with a very intense song, I still haven't figured out what it was. It seems there are Bowie songs I am not familiar with. Anna Calvi sang it immensely intense and went all out on her guitar, punishing it with her slide, while the orchestra cooked up a storm. And even then I did not need my earplugs for a single second. So it is possible to play not too loud and have a venue enraptured. It wasn't a rockshow, true, but came as close as classically trained musicians can come to one. Well done Stargaze and all your guest involved in this beautifully majestic tribute.