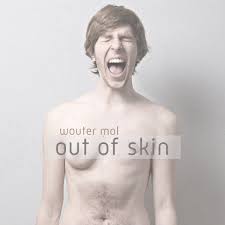 Time flies when you're having fun. We all know that. Yet, when so much fantastic albums get released as I have been able to write about in the past months, a somewhat older album that I promised to give a serious try, did get to find itself somewhere at the low end of an ever growing pile of new music. Not that I haven't played 'Out Of Skin' fairly regularly, no, it was the writing part that got out of sight.

'Out Of Skin' is an mini album that was released in April of 2017 by Wouter Mol, singer-songwriter. I ran into a band called Out of Skin as support act for The Stream mid April 2018 as part of that band's cd presentation show. (Read all about that here: http://wonomagazine.blogspot.com/2018/04/the-stream-live-with-out-of-skin-and.html).

On stage were a violinist, harpist and guitar player/singer. A very unusual set up for a band. The music became ever more intriguing. The cd cover in front of the band is one of the most disturbing I have come across, because what was I looking at? In the meantime I have learned that Wouter Mol has decided that his trio deserved another name than his own, and re-named the band after this album.

The songs on that album, 'Out Of Skin', were played, so I recognised most of the songs from the show. They come with an extreme seriousness, combined with a hint of sadness and a longing for something that definitely is not there. A tender longing for other. Whatever that other may be.

It is a mood that is easy to step into. Warm and comfortable. A mood to wallow in. Music that is able to prick and to sooth. The estranging moments are extremely prodding, as in pay attention, will you. Other moments allow to dream to the music and singing.

In the first song Mol used the cheapest trumpet intro possible: his voice. 'Modern Caveman' is an example of the prodding. The violin screeches, the harp is harsh and used in every way it was not invented for, the acoustic guitar is riffed as if Metallica plays unplugged.

The contrast with 'And Now It's Up To Him', is huge. The soft song, if I remember correctly inspired by an ugly, serious illness, is soothing, yet the violin takes it into a totally different direction, as a jet plane crashing, in the softest way possible. The harmonies are beautiful at the same time. This continues into the almost barren 'Leave You For a While'. It is easy, it seems, to capture beauty in so little music. Out of Skin pulls this effect off without any effort or so the song tells us. How much versions of this song exist?, is a question that does not need an answer, as we can hear perfection. Recognise it for what it is and are grateful for it.

'Ran away From Distance', continues the mood that has been set. A song that has the potential to run shivers down my spine. Some prodding is involved in the second half of the song. Out of Skin is not afraid to throw in some unharmonious notes upsetting the apple cart only to set it back on its wheels in the final part of the song. The interplay between guitar, harp and violin is so delicate here, that the other parts are sometimes near frightening. Together they make 'Out Of Skin' unique, give it its unique touch.

The album ends with two live versions of songs. 'Jam Ran Away From Distance' and 'Human'.

Out of Skin does not make music for every moment of the day. It has a level of intensity that demands attention, something not available all of the time. 'Out Of Skin' is an album for those moments that allow for playing a record 100% for the joy of listening to something special. And that 'Out Of Skin' is, totally qualifies even. Music at times so delicate and fragile it has to defend itself like a frill-necked lizard. Sticking it all out, making itself bigger than all else or so it thinks. Out of Skin is extremely well equipped to take care of itself. Check them out as you are in for a treat.

You can listen to and buy 'Out Of Skin' here: