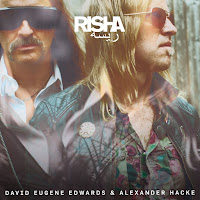 When did I buy my first 16 Horsepower album? It must have been after the release of 'Low Estate', as I remember having 'Sackcloth And Ashes' on a cassette copy. (Yes, folks, remember that one?) But who is Alexander Hacke?

Edward's sound by now is overly familiar. Since disbanding 16 Horsepower he has explored his extremely intense music with Woven Hand. There no longer are surprises to be expected from him. A collaboration with another musician might open new avenues for him to make music in. So let's peruse further into the album called Risha.

The unusual name Hacke associated the name Blixa Bargeld in my mind and proved correct. Alexander Hacke is a long time member of the German experimental group Einstürzende Neubauten. A band I do not associate with music in the conventional way. So what is his influence on Edwards?

Nothing, where his way of singing is concerned. David Eugene Edwards here is totally his own man. Which is only logical. Someone sings as he sings. Edwards uses his voice in the deeper registers, trying to conjure up moods that go beyond the here and now of our daily troubles and toils. Ghosts and devils are exorcized, the Lord asked for assistance to not be led into temptation and asked for forgiveness when all else fails. The instruments he uses are always organic, stemming from age old traditions.

It is here where Alexander Hacke steps in. David Eugene Edwards' singing is underscored with electronic beats, weird noises, synths and sequencers. It doesn't so much change the mood that usually comes with Edwards' presence, that simply is too dominant to change, it enhances it in several ways. Underscores it with capitol lettering.

Risha starts almost undercooled. Dark sounds creep from my speakers like snakes slivering towards me slowly but surely. An acoustic guitar is in the middle of the murky, condensed sound. The percussive sound that moves in and out of the song, is ominous, near threatening. "On earth, as it is in heaven, on earth ... heavens of earthly delight". The lyrics move into familiar territory. The temptations on earth do not make for a heavenly existence. The opening song is of such an intense beauty, while trying to estrange me the whole time from it as a whole. Separating earthly delight from heavenly beauty. Luckily for me I do not mind enjoying both when offered and Edwards & Hacke do just that here.

The condensed yet fast beat of 'All In The Palm' with the strong electronic undercurrent comes as a shock. Nothing prepared me for this onslaught, the first time I heard it. Here it is Alexander Hacke on David Eugene Edwards' tail, instead of the devil. Relentlessly the beat drives him onwards, while he is singing into his 30s style microphone, distorting his voice. The song is totally turned upside down by an electronic intermezzo, before the beat returns like a high speed train coming towards me out of nowhere at warp speed. The song integrates an acoustic guitar at the end as well.

So far it may be clear that something is happening on Risha. Perhaps I don't yet know what it is, but Alexander Hacke is definitely having an influence on David Eugene Edwards. 'The Tell' is another song where Hacke goes full out and Edwards dutifully follows. Again there is this intermezzo, this time with a faintly familiar melody, before the beat returns relentlessly accompanied by a loud, very distorted electric guitar that is wailing like it has just been separated at the U.S. border from its manufacturer.

I can't say that the music on Risha is comfortable, but then was the music of David Eugene Edwards ever comfortable? There you go. When moving down Risha, there are songs that can be identified as more Edwards and others more Hacke. Both estrange the other's music more than enough to speak of a true collaboration. Where earlier this week I wrote on Arthur Buck, that Peter Buck seemed more like a solo guitarist in Joseph Arthur's band, here the two artist come up with the best of the two of them. Yes, Edwards' voice is dominant, of course, the music is a hybrid. Impressive, loud, intrusive but above all, good.

Risha is a collaboration that fully works. It may come as a shock to 16 Horsepower and Woven Hand aficionados (and who knows to Einstürzende Neubauten ones to, I can't tell) they would do themselves a favour to take this album in, fully completely. It seems 1 + 1 can equal three sometimes.